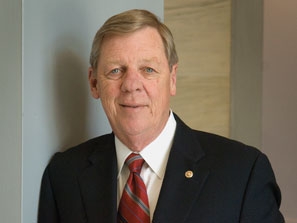 U.S. Sen. Johnny Isakson (R-GA) has urged the Obama Administration to heed Federal Reserve Chairman Ben Bernanke’s warning that overly tight lending standards are a threat to our nation’s housing recovery. Over the past two years, Sen. Isakson has repeatedly called on the Administration to revise its proposed rule that would prevent responsible homebuyers from obtaining Qualified Residential Mortgages (QRMs) by requiring a 20 percent downpayment. Chairman Bernanke, in a recent speech to the Operation HOPE Global Financial Dignity Summit in Atlanta, stated of the attempts to correct previously lax mortgage lending standards that it “seems likely at this point that the pendulum has swung too far the other way, and that overly tight lending standards may now be preventing creditworthy borrowers from buying homes, thereby slowing the revival in housing and impeding the economic recovery.” “By putting into effect the 20 percent downpayment requirement for Qualified Residential Mortgages, the Administration is exacerbating the housing recession and preventing recovery, just as Chairman Bernanke warned yesterday," said Sen. Isakson. "If the administration is serious about improving the economy, it cannot impose overly restrictive rules like the one that is on the table now and expect economic recovery.” Isakson worked with Sens. Kay Hagan (D-NC) and Mary Landrieu (D-LA) to include a provision in the Dodd-Frank Wall Street Reform and Consumer Protection Act to ensure that highly qualified homebuyers have access to affordable home loans. Isakson’s provision said that QRMs should be exempt from a section in the law that requires originators to retain at least a five percent interest in loan pools, known as “risk retention,” sold to investors. The financial regulators who are preparing to implement this provision have interpreted the Isakson-Hagan-Landrieu QRM provision in a way that the senators did not intend. The regulators have proposed that homebuyers must come up with a 20 percent downpayment in order to qualify for the exempted mortgages. Lawmakers and various industry and consumer groups have called on regulators several times in the past two years to revise the proposed 20 percent downpayment requirement, insisting that the regulators did not follow the Congress’ legislative intent and explicit recommendations to require a sensible downpayment. Last year, Sen. Isakson, along with Sens. Landrieu and Hagan, led a bipartisan group of 39 Senators in writing a letter urging federal regulators to avoid restricting credit to middle class families working to own a home. Over 250 members of the U.S. House of Representatives joined together to write a subsequent letter opposing the rule.
Link copied
Published
Nov 20, 2012
Coming Up See All
Dec
07
OriginatorTech
Virtual
•
11:00 AM ET
Dec
09
California Mortgage Expo – Irvine
Irvine, CA
Jan
13
Non-QM Summit
Uncasville, CT
Get the Daily
Advertisement
Advertisement
Analysis and Data
Property Insurance Costs Poised to Rise from Climate Events — And Not Only On The Coasts