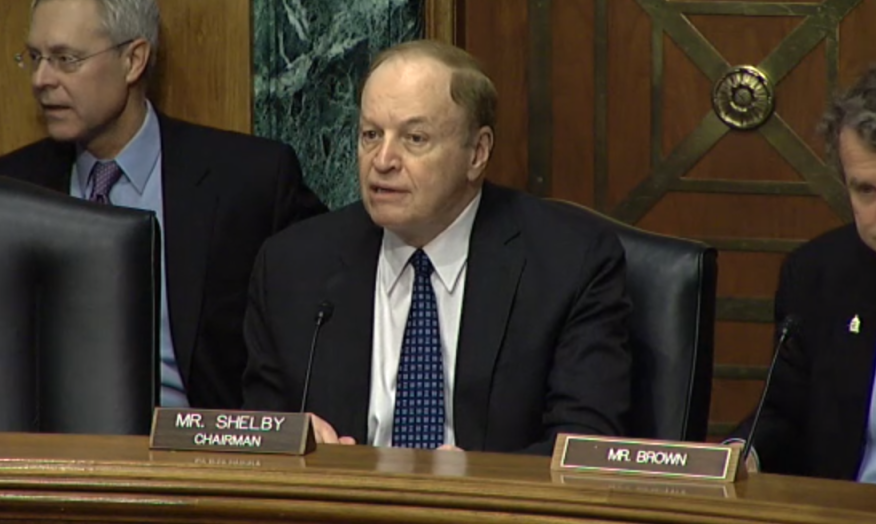 The U.S. Senate Banking Committee, led by Chairman U.S. Sen. Richard Shelby (R-AL), took aim this morning at the continuing problems facing homeowners and originators with a hearing titled “Regulatory Burdens to Obtaining Mortgage Credit.” Officers from three leading industry trade groups and a prominent housing policy expert from a left-of-center think tank provided input on how the federal government could improve efforts to expand homeownership without weighing down lenders with onerous rules and guidelines.

In testimony delivered before the committee, Tom Woods, chairman of the National Association of Home Builders (NAHB) and president of Custom Woods Homes, raised concerns on a key aspect of the Ability-to-Repay (ATR) and recommended a policy shift by the Consumer Financial Protection Bureau (CFPB).

Woods also argued that federal policies relating to the appraisal system for residential properties was creating more problems than solutions.

“While lenders, federal banking regulators and federally related housing agencies implemented corrective measures in response to valuation breakdowns that came to light in the wake of the Great Recession, and Congress mandated additional measures in the Dodd-Frank Act, these steps did not address fundamental flaws and shortcomings of the U.S. residential appraisal framework,” said Woods. “Improper appraisal practices, a shortage of experienced appraisers and inadequate oversight of the appraisal system continue to restrict the flow of mortgage credit and retard the housing recovery.”

Woods added that NAHB was not advocating that appraisals should be higher than the real market.

“Rather, our goal is to establish an appraisal system that produces accurate values through all phases of the housing cycle,” Woods said. “Other challenges facing the appraisal industry include shortcomings in appraiser training and experience in dealing with new construction and green building. Additionally, there is insufficient new construction, energy efficient and green building data available to appraisers and current valuation practices do not provide a process for expedited appeals of inaccurate or faulty appraisals. Oversight of appraiser qualifications and appraisal practices falls to the individual states, and many jurisdictions have inadequate resources to adequately perform this function. In some states, fees collected for appraiser licensing and certification are swept into a general fund and are not utilized in appraisal/appraiser oversight and enforcement.”

Chris Polychron, president of the National Association of Realtors (NAR) and executive broker at First Choice Realty, called attention to a major policy shift coming this summer, with a plea for Washington to reconsider its full-speed-ahead approach to this change.

“On Aug. 1, 2015, significant Real Estate Settlement Procedures Act (RESPA) and Truth-in-Lending (TILA) changes go into effect during the busiest transaction time of the year,” he said. “There will no longer be a Good Faith Estimate (GFE) or Truth-in-Lending disclosures. Those two forms have been combined into a single Loan Estimate, or LE. While NAR is supportive of this harmonization, there will be unanticipated problems and issues uncovered in the implementation. NAR, as well as other industry groups, have urged CFPB to provide for a restrained enforcement period on the RESPA-TILA integration regulation, and have asked them to clarify TILA and RESPA liabilities under the regulation.”

“While Congress provided relief in recent years, uncertainty exists for these homeowners today,” Polychron continued. “For many of these homeowners, a short sale or workout is the most viable option. However, the income tax exemption on mortgage debt forgiven in a short sale or a workout for principal residences was extended late last year retroactively, but expired at the end of 2014. Not having this relief, many families will simply walk away and accept a foreclosure on their home. This is contrary to the goal of every policy designed to keep people in their homes and prevent foreclosures. Unless remedied, homeowners who participate in a workout or short sale will have to pay tax on ‘phantom income’ from forgiven debt. This is not only unfair but harms families, neighborhoods and communities.”

Polychron put the spotlight on another federal policy that he considered to be detrimental to the health of the housing market.

“High guarantee fees (g-fees) and loan level pricing adjustments (LLPAs) charged by the GSEs are negatively impacting the housing recovery,” he said. “These enterprises buy single-family mortgages from mortgage companies, commercial banks, credit unions, and other financial institutions. A key revenue component for the GSEs is a g-fee received for guaranteeing the payment of principal and interest on their mortgage backed securities (MBS). The g-fee is a significant factor in determining profits earned from this credit guarantee. The g-fee covers projected credit losses from borrower defaults over the life of the loans, administrative costs, and a return on capital.

“Continued increases in g-fees and upfront borrower costs will extend a trend of reduced access to mortgage credit, which is counter to a principal duty of the FHFA director under the Housing and Economic Recovery Act of 2008,” he added. “Continuing to increase the fee will mean that larger numbers of consumers, many of them first time homebuyers, will be forced to pay substantially higher mortgage rates, or be left with limited housing finance options. NAR believes borrowers who are either purchasing a home or refinancing their existing mortgage using conventional financing are being charged excessive fees due to policy goals that go beyond protecting taxpayers from GSE losses. NAR is especially concerned with the disparate impact the changes will have on first-time homebuyers and other traditionally underserved borrowers. These families are more likely to bear the brunt of these fees, either because they have thin credit files and traditional credit models do not reflect payments toward housing expenses and utilities; or because they often make smaller downpayments than do other borrowers.”

J. David Motley, a former chairman of the Mortgage Bankers Association’s (MBA) Residential Board of Governors and president of Colonial Savings, took on the issue of the Qualified Mortgage (QM) as part of his testimony.

“MBA believes it is time to consider changes in the QM definition to mitigate the adverse impact the initial rule has had on access to credit for some borrowers,” Motley said. “We strongly believe these changes should be made holistically to the QM definition, and not limited to certain lenders based on charter types or business model. Consumers should not be forced to discern which institutions offer particular types of loans; their choices should not be limited to particular providers. Stratification of the market by establishing different underwriting standards for some lenders and not others only causes unnecessary consumer confusion and will lessen competition.”

Motley also advocated an expansion of the QM Safe Harbor.

“Because of certain flaws in the definition of the Average Prime Offer Rate, the calculation is biased low as a measure of the typical prime mortgage in the market,” Motley remarked. “In addition, the rate is pegged only weekly and therefore lags the market. In a volatile interest rate environment where interest rates can move up 50 basis points or more in few days, the 150 basis spread over the APOR may inadvertently knock many borrowers out of the QM safe harbor. MBA recommends that the spread over the APOR for defining a safe harbor QM be expanded to 200 basis points. This step alone would broaden the availability of credit by extending safe, sustainable QM loans to a greater number of creditworthy borrowers, particularly in a rising interest rate environment.”

Motley then took issue with the CFPB’s recent “rate checker” tool that was added to its Web site earlier this year.

“The tool was posted without any notice and opportunity to comment and notably does not include loan costs in its calculations,” he said. “Online rate checkers or trackers are inherently problematic because they tend to simplify markets and the collateral, borrower, and other factors that determine interest rates. The CFPB’s rate checker is no different but raises even a greater risk of borrower confusion because it comes with the imprimatur of a government agency.”

The committee also received testimony from Julia Gordon, senior director of housing and consumer finance at the Center for American Progress, who recommended a major change in the tax code relating to mortgage borrowers.”

“As part of comprehensive tax reform, we recommend replacing the current mortgage interest deduction with a tax credit,” Gordon said. “Our proposal would gradually phase out the current deduction and replace it with an 18 percent non-refundable tax credit. The effect of this change would be to provide the same benefit to all taxpayers, rather than a much larger benefit to those with higher incomes. Increasing the value of the credit to low- and moderate-income taxpayers not only increases fairness and access to homeownership, but also contributes to economic growth since it puts more money in the hands of a large number of families who typically need to spend every dollar they earn just to get by.”