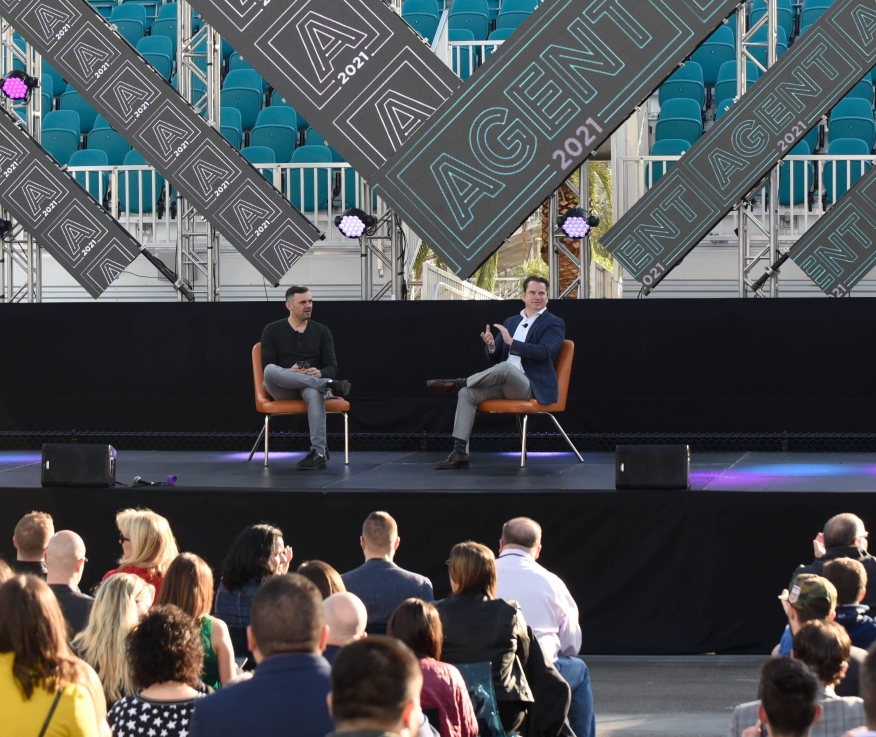 Staying motivated is key. Anyone can be motivated for 15 minutes or 15 hours, especially at the event. It’s important to stay motivated long after the event, maintaining focus and drive on the ideas and thoughts you have that you took away from the event.
It is evident that Gary Vaynerchuk has created a sustainable culture and following like no other influencer or marketer in America. His real, straight-to-the-point, blunt advice, facts, and comments appeal to people because it is the truth and he is consistent. His actions match his words. If you actually listen and follow what he says, he truly gives you the blueprint for your success.

My journey to Agent 2021 and initial impressions

I contemplated going to this event for the last two months. Needless to say, I bought my ticket two days before the event, booked my flight the day before the event, and booked my hotel the day of the event. I was going back and forth talking myself in and out of attending this event and finally came to the conclusion that I needed this potential impact now more than ever. My goal was to take away just one thing from the event and that would be well worth the $1,250 ticket. I took away a lot more than just one thing to implement into my life and business.
I couldn’t believe how many people at this event actually brought their own videographer to follow them around to create content. It was almost too much in my opinion. I felt as if the people there with video guys were too worried and concerned about their image and actually “trying to be Gary V” rather than being themselves as opposed to learning from Gary and the rest of the speakers on each panel and fireside chat. They all dressed to the 9s (or so they thought) and were on Facetime and IG Live way too much for my liking, as the focus was to meet like-minded people and LEARN. It seemed as though a lot of people attended the event to say they attended the event, for their peers and colleagues to be impressed.

Just f***ing do it! That is the slogan I would create for the event if I had to create one. The one thing that I hold value to above all is that there are endless opportunities to grow, evolve and develop both the real estate and mortgage marketplace, in addition to personal brands behind both mortgage and real estate people. A lot of people are struggling with image, content and posts. Everyone is being told to “post more” and “engage social media,” which is causing insecurity amongst both industries. This is interesting to me, but then again, the majority of people are insecure and don’t want to be judged. I totally understand that.
About two years ago when I really started heavily posting on all social media platforms, you wouldn’t believe the messages I got from people, mostly revolving around “You post too much,” “You’re all over the place,” and “Do you have a life?,” all of which caused mixed emotions for me as some were people I didn’t know and I had to ask myself, “Why this person would take their time to message me,” down to colleagues telling me I am not doing it right and need to get out and work more to meet more people (meanwhile, I hadn’t stopped doing anything ‘tactic wise’ with my ground to pound mentality that I had done before). People thought I had stopped “Working” (people define work differently), but I had begun perfecting incorporating social media into my everyday life and arsenal.

To me, it was simple, as I work daily, document it. Don’t try and create a post. If you’re in a scenario or see something, take your phone out and snap a pic, or start recording. My theory was the more business you’re actually doing, the more activity you’re actually apart of and generating, the more content you can produce without trying. I joked at times and said I swear these weird situations are happening to me so I can show everyone else what I go through on a daily basis. People even asked if I staged recorded phone calls or texts … none of which I did, they just would fall into my lap.
The interesting thing about posting onto social media is people don’t want to expose their true selves. They want to sit behind a screen, lurk, ghost-follow and maintain their “unknown image.” Many would comment on my posts something contradictory or opinionated and when I would explain myself or give further insight into my posts explaining more in-depth, they would private message me asking me, “Why I would call them out” (when I wasn’t, I was defending my posts or theory), or change the topic like “Hey man haven’t talked to you in years …” I’m like yeah and there is a reason we haven’t talked in years, ha ha.
In 2017, I got put onto Gary and have listened to hundreds, if not close to 1,000, videos Gary has put out. He has really helped me get back on track when I was off track or derailed. It was truly a breath of fresh air hearing him speak live and give his insight and unwind how he comes to theories, or how his brain works. He was telling his story how he met Mr. Higgins, who is partners with Steve Ross, and he said he met him in a bagel store in Jersey and then said, “That’s so f-ing Jersey,” which is so real and true. His brain works so fast that it is exciting to keep up with and hear what is going to come out of his mouth next. He reminds me of Ari Gold from the show “Entourage” but not acting, in real-life form.
People are so offended so easily today by truth and facts. I believe it’s due to a lack of parenting and accountability. Once someone tells you something, you either know is true about yourself, or disagrees with, all hell breaks loose. It’s amazing to see how when Gary keeps it 100 percent, people seem to digest it and listen. That is one of his true gifts and talents, and watching that during the Q&A was impressive. His answers are so direct and so quick, that it is almost too easy and too simple. Often times, the person asking the question knows the answer, but just needs reiteration or to hear it again. Such as “How do I get more?” Gary says, “More content”, and then they asked the same question with different wording and he re-answers, “More content.” His answers are just so simple that people just need to implement them.

What’s really holding us back?

Fear … the number one thing that holds us back and the major reason people make decisions. More than 90 percent of people actually live in fear. Gary highlighting this made me realize that I myself was self-doubting and living in fear, and I think I have accomplished a lot in the first 32 years of my life, but I can always do more. This event truly exposed my complacency with getting by and not achieving the significant growth that I know I have inside me. The majority of my stagnant growth has been excuses. Change of careers, financial losses, a four-month-old son, the weather, etc. When in all reality, I just have to get out of my own way, my own head, and build up and move vertically on the platforms I already have set up. Gary says most people look for new ways, rather than maximizing the methods they already have. As I was there, I texted my girlfriend and said to put on Craigslist and Facebook, $50 for access to my private roof deck for photoshoots since it’s one of the best views of the New York City skylines that exists in the world. If it books once per month, great. If it doesn’t book at all, who cares? This is where I truly believe Gary has his most value is sparking confidence, creativity and thinking outside of the box. I know for me, I consider myself to be a big thinker, and it’s hard to find other big thinkers who think as big and creative as I do, so when I find myself struggling or complement, Gary is the first one I put on to listen to.

To recap, I believe Gary should have most localized real estate and mortgage events and focus on these two platforms. The real estate and mortgage world could use more long-term thinkers, less excuse-makers, and better quality people. If these two specific industries bought in to everything Gary said, the industries would be completely different. People forget to hustle, they forget to work, they forget to always do the right thing.
Gary, if you ever truly were interested in getting into mortgage and real estate brokerage, branding and marketing, I would hope to be one of your go-to contacts to head this up. I believe that together we would be an unstoppable team and I bring youth to two outdated industries, and given I sacrificed my entire 20s to the real estate and mortgage game, I bring valuable experience that no one, and I confirm no one, else has, and my experiences are as unique and challenging as they get.
For everyone reading this, do not pass up an opportunity to attend any Gary V. event. AGENT2021 will be more than twice as successful next year, hopefully with more panels, more interaction, and for a longer time period, almost like a three-day boot camp or mastermind.
AGENT2021.
I got in the game … now it’s your turn. 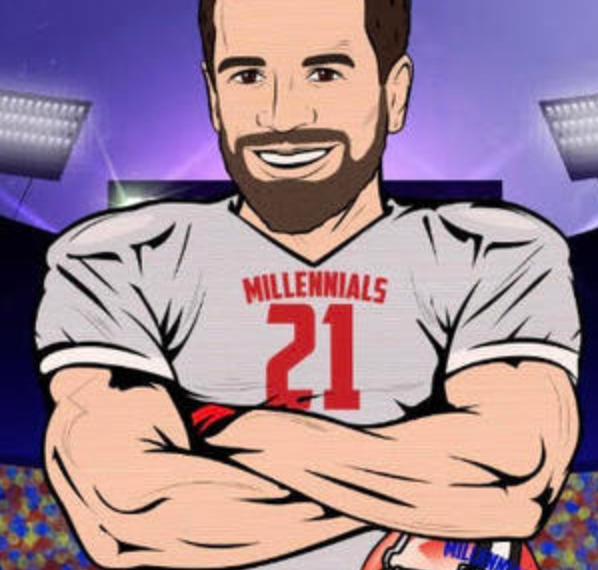 Jeff VanNote, "The Mortgage Quarterback" is an Educator, Speaker and Advisor on the mortgage industry. Jeff originated 189 loans in his first two full years in the origination business, taking old school tactics with a new school approach. His book, The Mortgage Playbook for Millennials Today! is available via Amazon.com. He may be reached by phone at (914) 486-0212, e-mail [email protected], visit TheMortgageQuarterback.com or follow Jeff on social media on Instagram @TheMortgageQuarterback, on Facebook at The Mortgage Quarterback, or on Twitter @iKnowJeff.