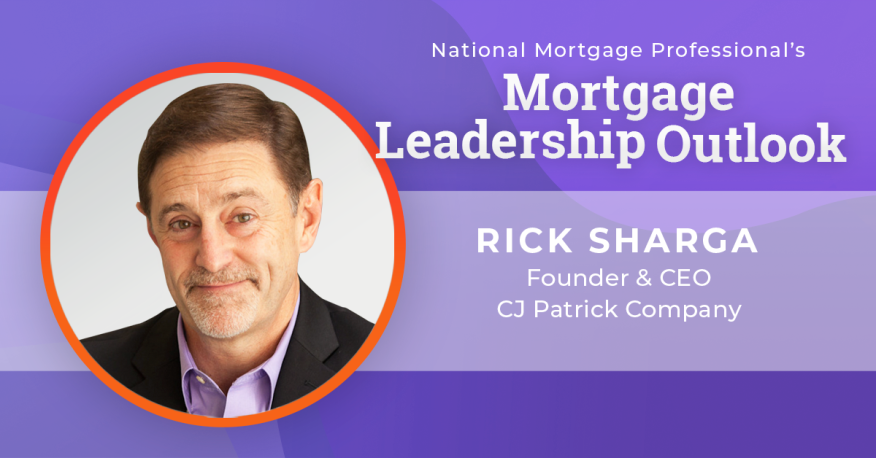 Rick Sharga, founder and CEO of CJ Patrick Company, joined the National Mortgage Professional Mortgage Leadership Outlook livestream on April 10. He said forbearance numbers and other factors make it possible the effects of the COVID-19 pandemic may not be as harmful as initially thought.
The Mortgage Leadership Outlook Series was designed to help mortgage professionals find clarity and reassurance during the COVID-19 pandemic. Sharga and the series’ host Andrew Berman, head of engagement and outreach for National Mortgage Professional magazine, discussed the current industry struggles.
Sharga said one positive indicator is the number of forbearance requests is not as high as initially feared. As he observed, if rates hit 25 percent, “What used to be the servicing industry would be a smoking heap of rubble somewhere in a giant crater.” He added that servicers can’t be blamed for not planning for this.
“They were in an environment where about a half-percent of borrowers were in default, and about three percent were delinquent,” noted Sharga. “You can’t go from a half-percent to 25 percent and expect to have enough capital to weather that kind of storm.”
But forbearances at those levels don’t appear to be coming to fruition, said Sharga, who added Fannie Mae and Freddie Mac, he said, he believes the forbearance numbers were about 1.5 percent of their loans.
“So, that makes me feel good. “If the moral hazard were real, we would be seeing much higher numbers of people trying to take advantage of that,” Sharga said.

“There are a couple of things to keep in mind. A lot of the legitimate forbearance requests are going to come from people who either lost a job, were furloughed or had their income hit,” Sharga said. The industries, he added, that were hit hardest were retail, restaurant, hospitality and travel. None of those are high paying jobs.
“My suspicion is homeownership rates among those groups is probably lower than average. It may well be the people being most affected are renters rather than homeowners. So, there may be a smaller buyer pool eligible for these programs than we think,” he predicted.
Sharga said you can’t put a program in place where you’re expecting people to defer payments without penalties and expect the servicers to foot the bill.
“When I hear some of the cavalier comments coming out of Washington, even from some of the regulators who should know better, it makes me wonder if any of these people know how the mortgage system works and the interdependency between investors, the servicers and the originators,” he said.

In his conversation with Berman, Sharga said there needs to be penalties for those trying to game the system.
“I’ve been saying if there’s any justice in the world when servicers later are putting together repayment plans and are now asking for documentation about your financials, there will be penalties if you did game the system,” Sharga said. “This is supposed to be working on the honor system. I would love to see the powers that be come out with that kind of statement. If we find out later you lied, there are going to be problems.”
The pandemic may not have the long-term effect on real estate that some fear, according to Sharga. He pointed out in previous instances going back to 2000, including 9/11 and two pandemics, the country saw a drop in transaction value, but didn’t see a significant decline in prices.
“My friend Mark Fleming, who is the chief economist at First American Financial, just did a report on prior recessions. Except for the last recession, which was caused by housing, in every prior recession going back to World War II, housing actually helped the economy get back on its feet. So, prices improved from the beginning of the recession to the end of the recession,” Sharga said.

That’s because there won’t be a significant drop in prices.
“I’m optimistic if this doesn’t go on too long—and that means the majority of businesses survive and the majority of the employees get their jobs back—and the fundamentals were as strong to begin with, I don’t know if we’re going to have a huge drop off in prices. There are only about 750,000 properties across the country that are for sale right now,” Sharga observed. “The lack of supply might protect values from dropping too far. I wouldn’t be surprised to see a minimal drop in some of the markets that were a little frothy to being with. Nationally, what we’re probably going to see is a slowdown in appreciation rather than an absolute drop. That’s my optimistic position on it right now.”
Sharga added, “Anecdotally, I’m hearing from Realtors across the country that sales are still going on. We haven’t gone to zero. We certainly aren’t where we were a month ago, but I expect transaction volume to be bad in March, worse in April and weak in May. Right now is when people are doing their final looks at homes and putting their mortgages in place to buy something in May. I don’t think we’ll start to see numbers feel much better until maybe June, and that depends on how long most states are under Shelter-in-Place orders.”

A fundamental difference between now and the 2008 recession, Sharga explained, is if you look at these numbers, the majority of the 18 million currently unemployed have been told if you’re out of work, it’s for now and not forever.
“In 2008, we had a weak underlying economy. We were losing jobs rather than creating jobs. The people who were losing jobs weren’t being told to just stick around for a month or two. They were being told their job doesn’t exist anymore,” said Sharga.
Sharga said the current unemployment spike was to be expected because everybody was sent home. Sharga struck probably his only gloomy outlook when he said the recessionary numbers that you haven’t heard about, but you will hear about are to be expected.
“They’re going to be ugly because our economy is 70 percent based on consumer spending, and we just sent them all home,” said Sharga. “All they appear to be buying right now are masks and toilet paper. It’s going to be a rough couple of months. Nobody should be surprised by the numbers.”
Without the pandemic, Sharga said, this would have been a strong year for real estate.
“All the underlying fundamentals were good. We were looking at jobs, unemployment was at a 50-year low, wages were growing faster than homes prices, and even the builders were waking up from their long hibernations, and interest rates were at almost-historic lows,” he said.
The only thing that was keeping the market from exploding, Sharga added, that there wasn’t enough inventory mostly because of the builders under-building to demand. In part, some people in upper-middle and higher levels didn’t see the advantages of trading up because of some of the tax laws that were changed. In part because there were still some people underwater on their loans 10 years into the recovery who just couldn’t afford to put their homes on the market.
“If this hadn’t hit, we had a really good January, pending sales were way up in February for March, we were looking to have a pretty healthy spring selling season. Purchase activity was strong. All systems were go,” he said.
Previous guests include Gary Malis, Patrick Stone, Robert Senko, Samir Dedhia, David H. Stevens, Peter Norden, Rob Chrisman and more.
Click here to see all the interviews from the Mortgage Leadership Outlook series on its YouTube channel.