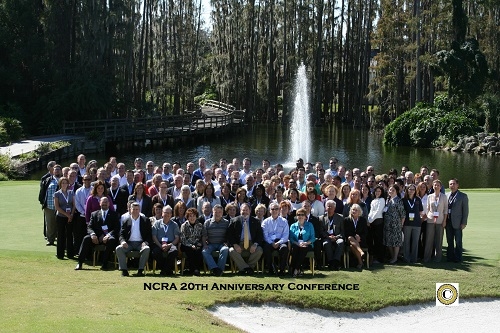 In combination with celebrating its 20th anniversary of representing consumer reporting agencies providing data to the housing industry, the National Credit Reporting Association has changed its name to the National Consumer Reporting Association. This change was announced at its annual national education conference in Tampa, Fla. in November where the members selected the new logo. The conference was highlighted by more than 160 people learning from a vast group of speakers from private sector, government and two of the national credit repositories. The Consumer Financial Protection Bureau (CFPB), Federal Trade Commission (FTC), and U.S. Justice Department were all represented, covering issues on credit reporting, tenant screening and employment screening. In addition to the educational sessions, there were good times at the feature event, a Cuban street festival with live Latin music, food, drinks, games and cigars hand-rolled on site. Compliance was a major feature of the educational sessions, as the CFPB and Experian covered issues related each of their respective audits. Another hot topic, desperate impact, was a group discussion lead by NCRA Counsel Larry Henry. Desperate impact has taken a much higher profile in recent months, even though the concept dates back nearly 40 years in Civil Rights law. The ability to obtain criminal data and credit data in the future will be weighed with consideration of desperate impact to make sure there is factual performance related to the use of the data. From the entertainment perspective, several NCRA members provided highlight reel coverage of the power of hypnosis as they went under the spell of Erick Kand. Erick specializes in corporate hypnosis and provided an entertaining lunch experience for both those on the stage and in the audience. NCRA believes that changing the word “credit” to “consumer” in their association name, the new name more accurately reflects our members’ products. A consumer report is the legal term for what our members provide, as defined in the federal law that regulates the credit industry. Regardless of the specific industry format, mortgage, tenant or background screening, NCRA members provide crucial information for housing-related decisions. The majority of NCRA’s original membership provides credit reports to the mortgage lending industry. Other consumer information products and services relating to or required by mortgage lenders such as flood zone determinations, IRS tax transcripts, and fraud prevention tools, have become commonplace in the NCRA member service portfolio. Many NCRA members also provide information to the multifamily housing industry; they produce credit reports, eviction records, and criminal background histories for landlords and property managers making rental decisions. Some members are heavily entrenched in full-service background screening as well. The term “consumer report,” as defined in the Fair Credit Reporting Act, is the umbrella that covers all of the members’ products and services. “It’s an exciting time at the National Consumer Reporting Association as we celebrate our 20th year and reflect on how the industries we serve and our business have evolved during this time,” said NCRA President Daphne Large. “Our name change reflects this evolution. We are most fortunate to have a highly-tenured and experienced Board of Directors along with the outstanding leadership and representation of our executive director, Terry Clemans.” This is the second growth-related name change in NCRA’s 20-year history. The organization was founded in 1992 as the National Association of Independent Credit Reporting Agencies (NAICRA). In response to requests by companies affiliated with one of the three national credit bureaus, NAICRA became NCRA in 1996. Removing the word “Independent” from the name allowed membership inclusion for those affiliated companies previously prohibited from their ranks. The current name change is in response to better representation of the membership’s growing business model. Terry W. Clemans is executive director of the National Consumer Reporting Association (NCRA). He may be reached at (630) 539-1525 or e-mail [email protected] 2013 NCRA President Daphne Large receives the gavel of association leadership from Executive Director Terry Clemans   Attendees are welcomed to the 20th Annual NCRA Conference   NCRA Counsel Larry Henry discusses desperate impact with the audience   Erick Kand, who specializes in corporate hypnosis, provided an entertaining lunch experience   The crowd listens attentively to the panel discussion
Link copied
Published
Jun 05, 2013
Coming Up See All
Feb
14
Texas Mortgage Roundup — Austin
Austin, TX
Mar
01
Atlanta Mortgage Expo
Atlanta, GA
Mar
15
Mid-South Mortgage Expo
Nashville, TN
Get the Daily
Advertisement
Advertisement
Operations
Founder Fights loanDepot Board Over Adding WFG CEO