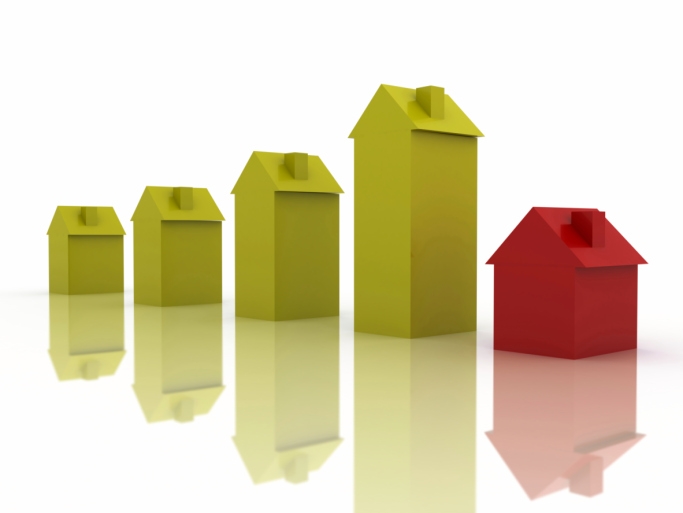 Las Vegas-area home sales fell in June compared with May but remained higher than a year earlier as the share of homes purchased with cash climbed to a record 60.1 percent of all homes sold. The median price paid for a home rose above a year earlier for the 15th consecutive month, the result of demand outweighing supply, a sharp drop in foreclosure resales and a big increase in mid- to high-end activity, according to San Diego-based DataQuick. In June, 4,739 new and resale houses and condos closed escrow in the Las Vegas-Paradise metro area (Clark County). That was down 4.7 percent from the month before and up 5.5 percent from a year earlier, according to San Diego-based DataQuick. The firm tracks real estate trends nationally via public property records. On average, sales between May and June have increased 8.0 percent since 1994, when DataQuick's complete Las Vegas-area statistics begin. Total home sales have increased year-over-year for the past three months, following 10 consecutive months of year-over-year sales declines. Total June sales in the Las Vegas region were 9.9 percent below the average number of homes sold during all months of June since 1994. However, resales of houses and condos combined were 15.0 percent higher than average for the month of June, while sales of newly built homes were 60.8 percent below average for a June. The number of mid- to high-end home sales continued to shoot up from year-ago levels, while the number of lower-cost deals plunged again. Sales of homes priced below $100,000 dropped 45.2 percent in June compared with a year earlier, while the number of transactions below $200,000 fell 17.5 percent year-over-year. Sales above $200,000 surged 86.1 percent year-over-year, pushed up by the combination of home price appreciation and strong demand in mid- to high-end markets. June sales of homes priced from $200,000 to $500,000 – a range that would include many move-up purchases – jumped 83.8 percent from a year earlier, while the number sold over $500,000 more than doubled, rising 109.1 percent. The median price paid for all new and resale houses and condos sold across the Las Vegas region (Clark County) in June was $169,100, which is the highest for any month since the median was $175,000 in December 2008. Last month's median rose 3.7 percent from the prior month and increased 35.3 percent from a year earlier. The median has risen year-over-year for 15 consecutive months, with those gains ranging from 1.7 percent to 35.3 percent. These year-over-year gains have been double-digit for the last 12 consecutive months. Recent sharp increases in the median sale price reflect price appreciation triggered by strong demand meeting a relatively low supply of homes for sale, as well as changes in market mix. Fewer of the homes re-selling now are low-cost foreclosed properties, and more are move-up homes in mid- to high-priced neighborhoods. Despite the median’s year-over-year surge in June, it was still 45.8 percent below its November 2006 peak of $312,000. The median has been rising off a cyclical low point of $110,000 in January 2012, which was the lowest level since the median was also $110,000 in April 1994.
Link copied
Published
Jul 31, 2013
Coming Up See All
Aug
11
California Mortgage Expo — San Diego
San Diego, CA
Aug
11
SMS Marketing 101
Webinar
2:00 PM ET
Aug
18
Maximum Acceleration
Las Vegas, NV
Get the Daily
Advertisement
Advertisement
Wholesale
loanDepot Dumping Brokers, Exits Wholesale