Foreclosures for Month of June Down, Year Over Year – NMP Skip to main content

Foreclosures for Month of June Down, Year Over Year

“While 32 straight months of year-over-year decline in the foreclosure rate is cause for celebration, the total number of homes still in the foreclosure process remains almost four times as high as the average in the early 2000s,” said Mark Fleming, chief economist for CoreLogic. “Additionally, there is concern over whether or not we can maintain this pace of improvement as the foreclosure inventory becomes more concentrated in judicial states with lengthier, more complex processes and timelines.”

“The national inventory of foreclosed homes fell for the 32nd straight month to just under 650,000 in June. Most of the U.S. has reduced its shadow inventory to pre-recession levels, but the Northeast, Florida and the Pacific Northwest remain elevated,” said Anand Nallathambi, president and CEO of CoreLogic. “The great news here is that the basic underpinnings of the housing market are strengthening, but there is still work to do.”

Highlights as of June 2014:
►June represents 17 consecutive months of at least a 20-percent year-over-year decline in the national inventory of foreclosed homes.

►The five states with the highest foreclosure inventory as a percentage of all mortgaged homes were: New Jersey (5.7 percent), Florida (5.0 percent), New York (4.3 percent), Hawaii (3.1 percent) and Maine (2.7 percent). 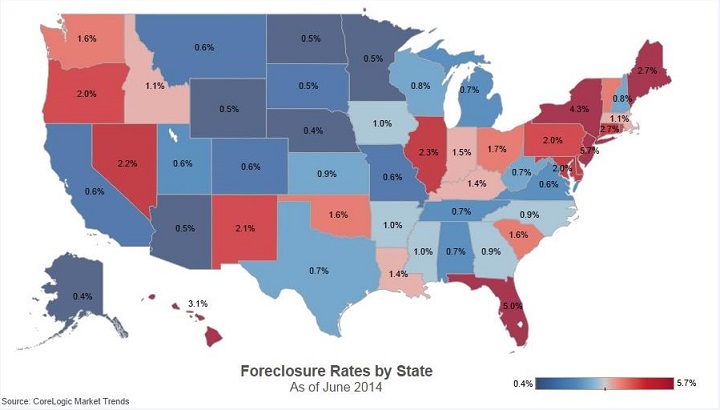