A new survey of affordable homeownership options has found the San Francisco area to be the nation’s priciest housing market and the Detroit metropolitan area to be the most financially accessible.

In the debut release of Realtor.com’s Mortgage Affordability Report, the nation’s 25 largest housing markets were analyzed using a mortgage-to-income ratio. The San Francisco area, which included the cities of Oakland and Hayward for this report, had at a mortgage-to-income ratio of 64.7 percent last year, and Realtor.com expects that to rise to 72 percent by the end of the year.

At the other end of the spectrum, the Detroit area—which included the cities of Warren and Dearborn for this report—had mortgage-to-income ratio of 12.4 percent last year, and Realtor.com forecasted it will rise to 13.2 percent by the end of the year. Behind Detroit in affordable cities are St. Louis, Cleveland, Atlanta and Pittsburgh.

“Over the last 10 years, we have seen marketplace gyrations ranging from bubble to burst to recovery to stabilization, and we are now seeing a market of extremes on the affordability front,” said Jonathan Smoke, chief economist for Realtor.com. “Buyers—especially first-time homebuyers—might feel more motivated as the overall market continues to improve, and this report provides potential buyers with local insight that is both informative and instructive.”

And for those people that believed renting was more affordable, Realtor.com found little evidence to back that—with San Francisco also topping the list of the highest forecasted rent-to-income ratio at 40.9 percent

“Renting is not an affordability strategy,” said Smoke. “In many of these markets, the equivalent rent is actually higher, which limits ability to save for an eventual downpayment.” 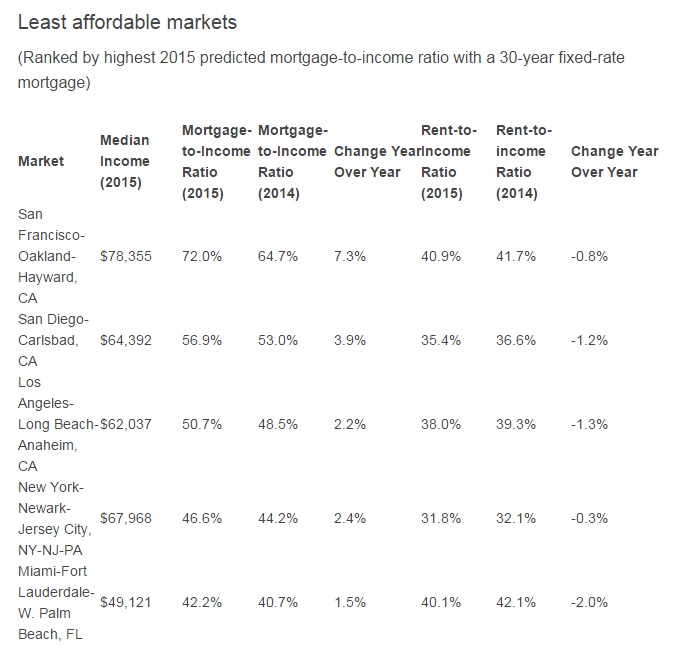