Home prices continued their seemingly unstoppable ascension, according to the latest data from the S&P CoreLogic Case-Shiller Indices.
The S&P CoreLogic Case-Shiller U.S. National Home Price NSA Index, covering all nine U.S. census divisions, reported a 5.6 percent annual gain in November, up from 5.5 percent in October. The 10-City Composite posted a 4.5 percent annual increase, up from 4.3 percent in the previous month, while the 20-City Composite reported a year-over-year gain of 5.3 percent, up from 5.1 percent in October.
Before factoring in a seasonal adjustment, the National Index, the 10-City Composite and the 20-City Composite each posted a month-over-month gain of 0.2 percent in November. After the seasonal adjustment, the National Index recorded a 0.8 percent month-over-month increase, while both the 10-City and 20-City Composites each reported 0.9 percent month-over-month increases.
“With the S&P CoreLogic Case-Shiller National Home Price Index rising at about 5.5 percent annual rate over the last two-and-a-half years and having reached a new all-time high recently, one can argue that housing has recovered from the boom-bust cycle that began a dozen years ago,” said David M. Blitzer, managing director and chairman of the Index Committee at S&P Dow Jones Indices, who added that this situation could change with President Donald Trump in the White House. “The home prices and economic data are from late 2016. The new administration in Washington is seeking faster economic growth, increased investment in infrastructure, and changes in tax policy which could affect housing and home prices. Mortgage rates have increased since the election and stronger economic growth could push them higher. Further gains in personal income and employment may increase the demand for housing and add to price pressures when home prices are already rising about twice as fast as inflation.” 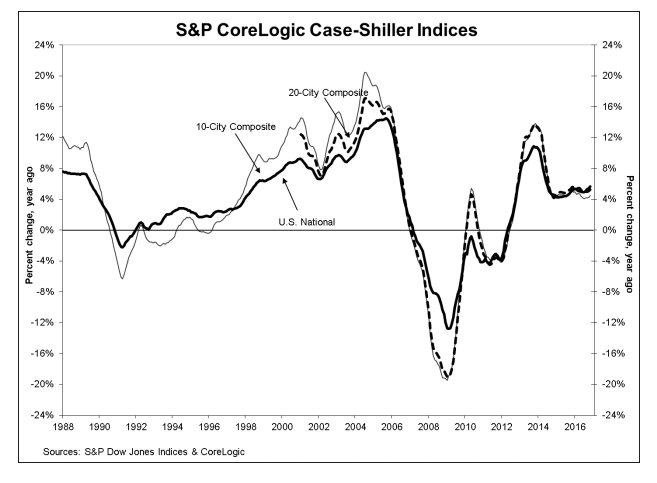