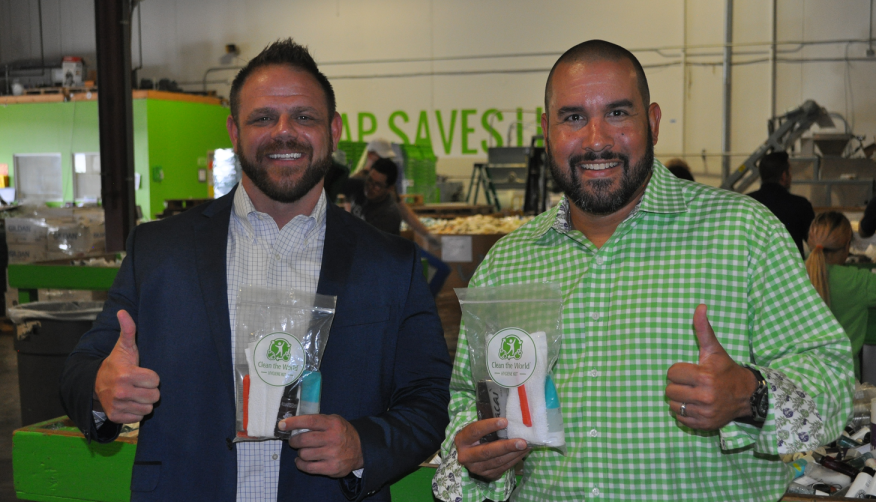 The Booyah Veteran Bus Project and Clean the World have announced the launch of Hike Across America, powered by Booyah Veteran Bus Project and Clean the World, a three-month initiative to raise awareness for homeless veterans and the difficulties they face going from active duty to civilian life. During the Hike Across America, Shane Johnson (pictured above left), Founder of the Booyah Veteran Bus Project, will walk 22 miles every day for 65 days—trekking coast-to-coast, from Florida to California, distributing Clean the World Veterans' Hygiene Kits to homeless veterans in need.
"This is a lead from the front initiative to not only bring awareness for but also, to take massive action across the nation to eliminate veteran homelessness and transitional issues caused by going from military life to civilian life,” said Johnson. “This unified partnership between Clean the World and Booyah Veteran Bus Project is the first major step in this initiative. We will no longer sit by the wayside and allow our veterans to fall into the trap of isolation due to the lack of transitional resources. We will band together outside of the military to create a cohesive team — a unit — and will make a concentrated effort to help transitioning veterans learn to dominate civilian life as they did in the military."
This is the second time Johnson and the Booyah Veteran Bus Project has hiked for veterans. In October of 2016, Johnson and his team completed a 360-plus mile trek from the Veteran's Hospital in Lake Nona, Fla. to Panama City, Fla. This year, with Johnson teaming up with Clean the World, the initiative is even bigger and more intense as the walk will consist of 65 consecutive days and more than 3,000 miles. The Hike Across America, a first-of-its-kind walk, began Sept. 11 in Orlando, Fla. and end in Camp Pendleton, Calif. on Nov. 14. The hike will be segmented into 22-mile intervals, representing the number of veterans that commit suicide every day and consists of 20 different city stops including a Veterans Day stop in Las Vegas.
"When we heard about the Booyah Veteran Bus Project, we knew Clean the World needed to be a part of this initiative," said Shawn Seipler (pictured above right), Founder and Chief Executive Officer of Clean the World. "With over 47,000 homeless veterans in the United States, we want to directly connect these heroes, who gave the ultimate sacrifice to our country, to organizations and services that will help them get back on their feet. By creating an army of volunteers and supporters, we will fight for our homeless Veteran community, provide the necessary resources to get them back into the workforce, and give them a step up towards changing their situation for the better."
During the walk, Johnson will visit homeless shelters specializing in serving veterans, raise awareness for veteran homelessness, and hand out Clean the World Veterans' Hygiene Kits to those in need. Veterans' Hygiene Kits are specialized with items specifically with veterans in mind: Two bars of soap, repurposed shampoo, toothpaste, toothbrush, deodorant, shaving cream, razor, comb, socks, and an inspirational notecard. In addition, veterans will be connected to counselors, pastors, and organizations in their local communities to provide them with the support needed to transition to civilian life and into the work force.
Link copied
Published
Sep 18, 2017
Coming Up See All
Aug
03
New York Mortgage Expo
Suffern, NY
Aug
10
OriginatorTech
Virtual
•
11:00 AM ET
Aug
12
California Mortgage Expo – San Diego
San Diego, CA
Get the Daily
Advertisement
Advertisement
FHA
FHA Extends Single-Family Eviction Moratorium