Existing-home sales increased in October to their strongest pace since earlier this summer, according to new data from the National Association of Realtors (NAR).
October’s sales data recorded a two percent rise to a seasonally adjusted annual rate of 5.48 million from a downwardly revised 5.37 million in September. Although sales were at their most vibrant level since the 5.51 million recorded in June, they were 0.9 percent below the level from one year ago.
The median existing-home price for all housing types in October was $247,000, up 5.5 percent from the $234,100 level one year earlier. October’s price increase was the 68th straight month of year-over-year gains.
However, total housing inventory at the end of October decreased 3.2 percent to 1.80 million existing homes available for sale, a 10.4 percent drop from one a year ago (2.01 million) and the 29th consecutive year-over-year decline. Unsold inventory is at a 3.9-month supply at the current sales pace, which is down from 4.4 months a year ago. First-time buyers were 32 percent of sales in October, up from 29 percent in September but slightly lower than the 33 percent sales level from October 2016.
“While the housing market gained a little more momentum last month, sales are still below year ago levels because low inventory is limiting choices for prospective buyers and keeping price growth elevated,” said NAR Chief Economist Lawrence Yun. “The residual effects on sales from Hurricanes Harvey and Irma are still seen in parts of Texas and Florida. However, sales should completely bounce back to their pre-storm levels by the end of the year, as demand for buying in these areas was very strong before the storms.” 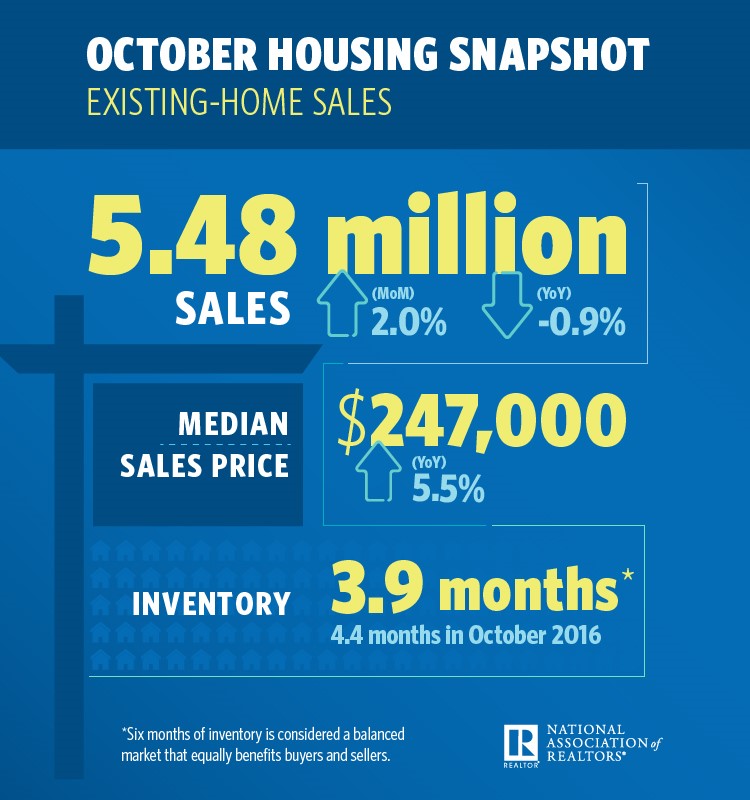