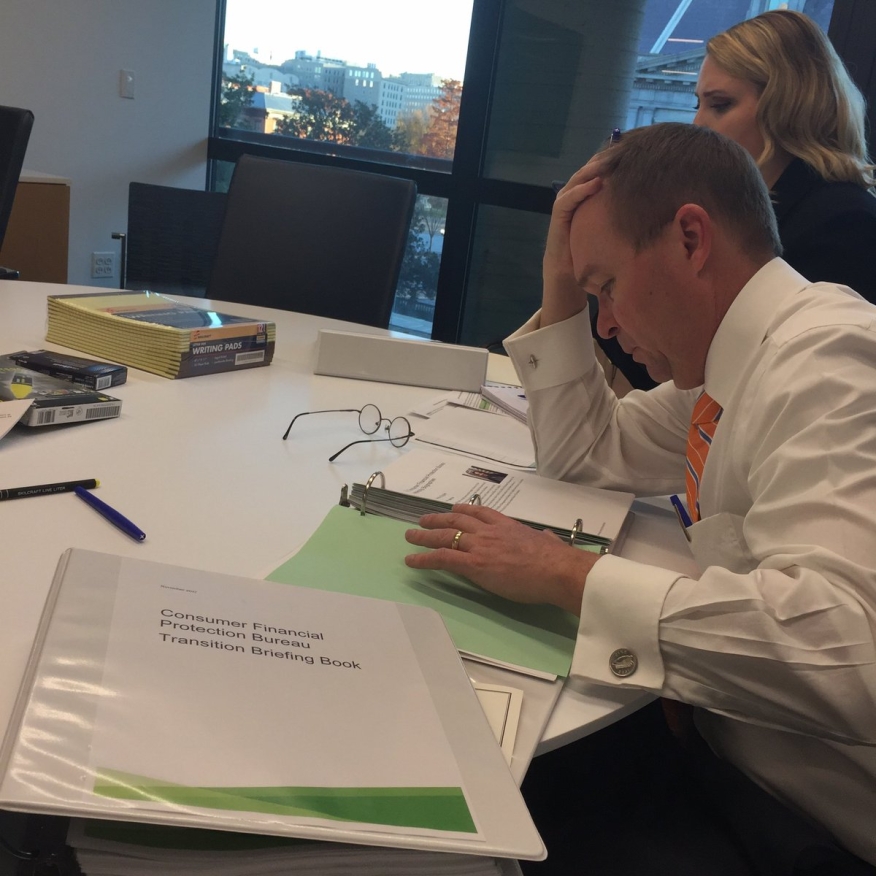 A federal court sided with President Trump and allowed his appointment of Mick Mulvaney as acting director of the Consumer Financial Protection Bureau (CFPB) to remain in place.
U.S. District Court Judge Timothy Kelly upheld the Mulvaney appointment by citing the unprecedented nature of having a regulator—in this case, outgoing CFPB Director Richard Cordray—name his own successor rather than have the president fill the position. "Denying the president's authority to appoint Mr. Mulvaney raises significant constitutional questions," Kelly said.
Kelly dismissed arguments that Mulvaney cannot remain as director of the Office of Management and Budget while holding the CFPB position, adding that "nothing in the statutes prevents Mr. Mulvaney from holding both of these positions." A new full-time CFPB director will require confirmation by the Senate.
Earlier in the day, Mulvaney further asserted his role as acting director at the Consumer Financial Protection Bureau (CFPB) by taking control of the Twitter channel associated with that position. In his first tweet this afternoon on the Twitter handle @CFPBDirector, Mulvaney posted a photo of himself working over documents at a desk. Mulvaney’s first tweet said, “Busy day at the @CFPB. Digging into the details.”
While Mulvaney was at work in his office, Sen. Elizabeth Warren (D-MA) appeared at a small protest in front of the CFPB’s headquarters. “For six years this agency has fought for working people,” said Warren. “And now it’s time for us to fight for the agency.”
Absent from public view was Leandra English, Cordray’s handpicked appointee for the acting director’s role. However, the attorney representing English in her lawsuit to void the Mulvaney appointment, Deepak Gupta, admitted on CNBC today that English was not financing her own litigation, but he repeatedly declined to identify who was paying her legal fees. “I don’t think it’s appropriate for me to be talking about that on TV right now,” he said, adding that he was not representing English on a pro bono basis.
Link copied
Published
Nov 28, 2017
Coming Up See All
Sep
28
DealDesk: Introduction to Acra Lending's Light Doc Programs
Webinar
2:00 PM ET
Sep
29
How to Win with Non-Delegated Correspondent - Key Insights on the Model and Fulfillment Solutions
Webinar
2:00 PM ET
Oct
06
How to Use Credit as A Strategic Tool to Attract More Leads, Make Better Offers and Close More Loans
Webinar
2:00 PM ET
Get the Daily
Advertisement
Advertisement
Military Lending
Saluting Military Lenders And Originators