The Best Place to Live in America Is … 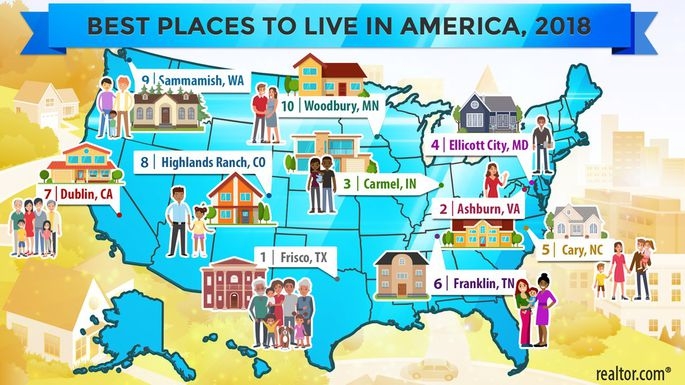 For the second year in a row, Realtor.com and Money Magazine have teamed up to offer their “Best Place to Live in America” list.
Whereas last year’s list focused on smaller towns, this year’s list put the spotlight on localities with populations of 50,000 or more. The list was analyzed based on more than 135,000 data points, covering economic health, public school performance, local amenities, housing, and cost of living; areas with high crime, low demographic diversity and poor economic health were not considered.
Using that distinctive criteria, the locality dubbed the Best Place to Live in America was Frisco, Texas, located 30 miles north of Dallas. Frisco, with a population of 177, 286, boasts a median household income of $117,642 and a median home price of $449,900. This is the second list that Frisco recently topped: it also peaked on the U.S. Census list of fastest-growing big cities, with an average of 37 new residents added daily between 2016 and 2017, a population spike of 8.2 percent.
Rounding out the top 10 on this list were Ashburn, Va.; Carmel, Ind.; Ellicott City, Md.; Cary, N.C.; Franklin, Tenn.; Dublin, Calif.; Highlands Ranch, Colo.; Sammamish, Wash.; and Woodbury, Minn.
Link copied
Published
Sep 17, 2018
Coming Up See All
Jun
01
DealDesk Focus on Acra Lending Rehab Loans
Webinar
1:00 PM ET
Jun
08
Motor City Mortgage Expo
Detroit, MI
Jun
08
DealDesk: Focus on the Angel Oak Mortgage Solutions Bank Statement Product
Webinar
2:00 PM ET
Get the Daily
Advertisement
Advertisement
Analysis and Data
First American: Housing Market Slowing by Design