The City with the Most Foreign-Born Homebuyers Is … 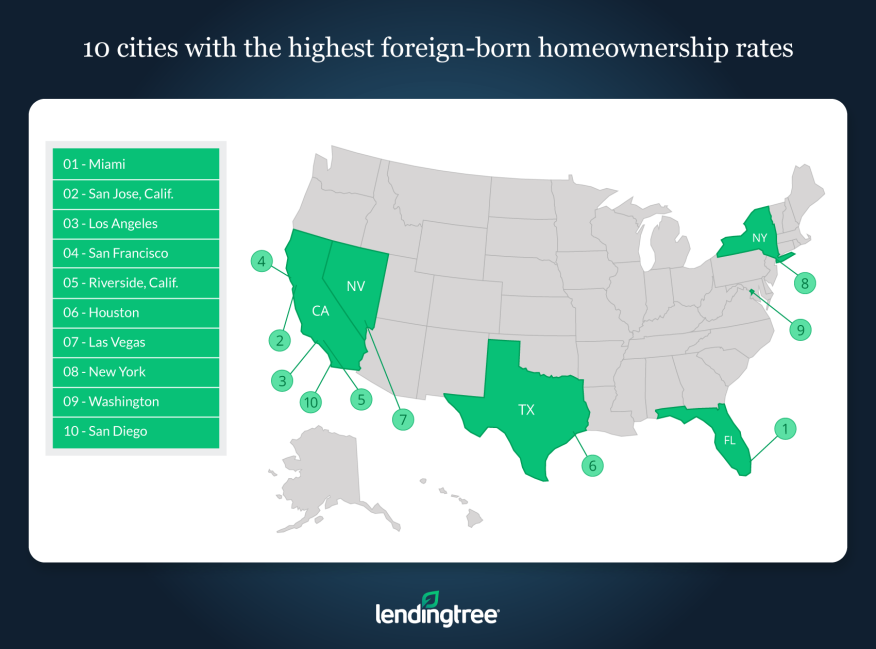 Foreign-born homebuyers seem to prefer coastal housing markets with higher than average home prices, according to a new data analysis from LendingTree.
Using statistics from the U.S. Census Bureau of the nation’s 50 largest cities, LendingTree determined that Miami has the highest percentage of foreign-born homebuyers, with 26 percent of property owners coming from other countries. Forty-one percent of Miami’s population is foreign-born. San Jose came in a close second, with a 25 percent share of foreign-born homeowners and a total foreign-born population of 39 percent. Five of the top 10 markets for foreign-born homeowners are in California, including Los Angeles (ranked third at 18 percent) and San Francisco (ranked fourth at 17.9 percent). Median home prices for the top 10 cities averaged $491,750.
“Out of the 50 largest cities in the country, those with a higher share of homes owned by foreign-born residents tend to have higher home prices,” said Tendayi Kapfidze, LendingTree’s Chief Economist. “This is not to say that immigrants raise home prices—rather, it’s likely that immigrants gravitate towards these cities which have higher home prices, as they also have more dynamic economies and thus more employment opportunities.”
At the far end of the spectrum, Pittsburgh trailed with only a two percent foreign-born homeownership rate and a four percent foreign-born population. The median home value in the Pittsburgh market is $153,300.
Link copied
Published
Oct 11, 2018
Coming Up See All
Aug
11
California Mortgage Expo — San Diego
San Diego, CA
Aug
11
SMS Marketing 101
Webinar
2:00 PM ET
Aug
18
Maximum Acceleration
Las Vegas, NV
Get the Daily
Advertisement
Advertisement
Analysis and Data
U.S. Added 528,000 Jobs In July