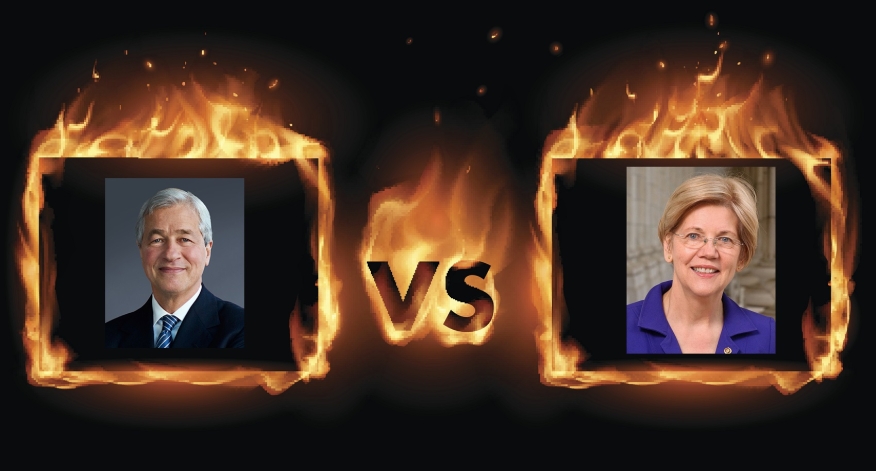 One of the nation’s most powerful bankers took on one of the nation’s most powerful bank critics in a feud that spanned broadcast and social media.
JPMorgan Chase Chairman and CEO Jamie Dimon used an appearance on CNBC’s “Closing Bell” to take aim at Sen. Elizabeth Warren (D-MA). When asked if Warren, who is seeking the Democratic presidential nomination, was anti-business, Dimon responded, “You really have to ask her what she really means. She uses some pretty harsh words, you know, some would say vilifies successful people. I don’t like vilifying anybody. I think we should applaud successful people.”
Warren’s campaign has featured policy proposals that would rely heavily on increasing taxes on companies and affluent Americans. Dimon warned that Warren’s proposed Accountable Capitalism Act would change “the complete nature of how you run a corporation” and argued that the proposed bill was out of sync with national values and culture.
“I think we have to look at [how] America was founded on free enterprise; freedom and free enterprise are interchangeable,” Dimon said. “If people have very specific things that we should do different, than we should think about doing them different.”
Dimon added that Warren’s proposed increases in federal government spending could create more problems than solutions.
“The road to hell is paved with good intentions when it comes to policy,” Dimon said. “A lot of government programs have been abysmal failures, and we should acknowledge that both problems need to be fixed, and those solutions didn’t work. Let’s try something different.”
Warren wasted no time in returning the volley. Taking to Twitter, she called out Dimon and the nation’s corporate executives for allegedly making their fortunes off the hard work of others.
“It's really simple: Jamie Dimon and his buddies are successful in part because of the opportunities, workforce, and public services that we all paid for,” she tweeted. “It's only fair that he and his billionaire friends chip in to make sure everyone else has a chance to succeed. The fact that they've reacted so strongly—so angrily!—to being asked to chip in more tells you all you need to know. The system is working great for the wealthy and well-connected, and Jamie Dimon doesn't want that to change. I'm going to fight to make sure it works for everyone.”
Link copied
Published
Nov 06, 2019
Coming Up See All
Dec
07
OriginatorTech
Virtual
•
11:00 AM ET
Dec
09
California Mortgage Expo – Irvine
Irvine, CA
Jan
13
Non-QM Summit
Uncasville, CT
Get the Daily
Advertisement
Advertisement
Industry News
Manufactured Housing: The New Affordable Alternative