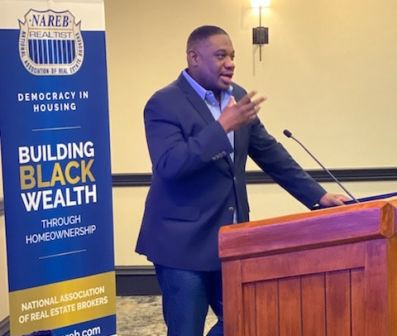 New data from the U.S. Census Bureau charting the another quarter of increases in the national rate for black homeownership was cautiously welcomed by Donnell Williams, president of the National Association of Real Estate Brokers (NAREB), a trade association for African-American real estate professionals.
During the fourth quarter of 2019, the Census Bureau recorded a 44 percent black homeownership rate, up from the 42.7 percent rate in the third quarter and 40.6 percent in the second quarter. One year earlier, the rate was 42.9 percent.
“While we remain positive about the upward trend, NAREB is mindful that a nearly 30 percentage point gap separates the current non-Hispanic white homeownership of 73.7 percent from the black homeownership rate of 44 percent,” said Williams. “As stated in a previous look at the third quarter rates, brisk seasonal sales could account for the increased black homeownership rate. However, these back-to-back quarterly increases into the fourth quarter indicate to us that black Americans are purchasing homes at a higher, more consistent rate.
The nation’s economic vibrancy, lower unemployment levels, a restored confidence in purchasing real estate and low interest rates, coupled with an increasingly more informed black consumer can all be factored into the six months of rate increases.”
Williams added that the last time the black homeownership rate was at this level was in the fourth quarter of 2012 at 44.5 percent. The national homeownership rate in the fourth quarter was 65.1 percent, slightly higher than the third quarter’s 64.8 percent.
“NAREB remains mindful of the volatility of the real estate marketplace, but trusts that black consumers, coupled with our concerted efforts to educate and inform black homebuyers about the wealth building benefits of owning a home will continue to boost black homeownership and economic futures,” Williams said.
Link copied
Coming Up See All
Jun
22
Chicago Mortgage Originators Expo
Countryside, IL
Jul
06
Ultimate Mortgage Expo
New Orleans, LA
Jul
13
Carolinas Connect Mortgage Expo
Charlotte, NC
Get the Daily
Advertisement
Advertisement
C-Suite Strategies
Eye, Eye Sir