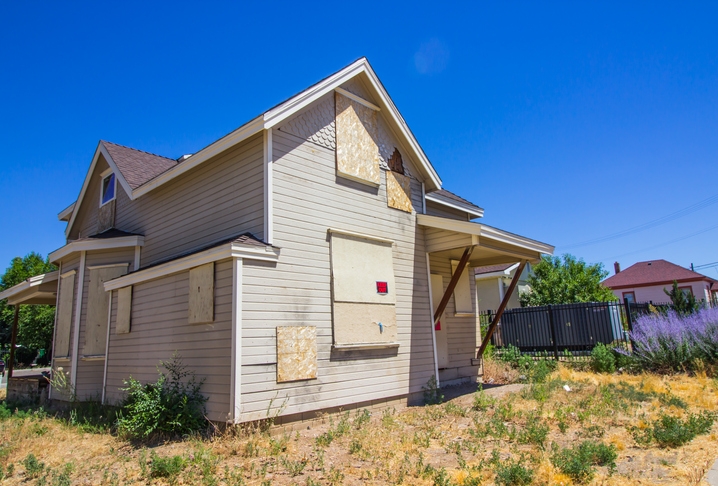 More than 1.52 million single-family homes and condos are currently vacant, according to new statistics from ATTOM Data Solutions. This represents 1.5 percent of all residences nationwide.
There are approximately 282,800 homes in the process of foreclosure, with roughly 8,700, or 3.1 percent, sitting empty in a so-called state of zombie foreclosure. The percentage is up from three percent in the fourth quarter of 2019 but down from the 5.8 percent level at its peak in the first quarter of 2014. The total number of properties in the process of foreclosure in the first quarter of this year is down 1.9 percent from the fourth quarter of 2019, while the number vacant foreclosures is up 1.7 percent.
New York led the nation with zombie properties (2,206), followed by Florida (1,390), Ohio (977), Illinois (943), Ohio (823) and Pennsylvania (317). Among the major metropolitan areas with at least 100,000 residential properties, Peoria, Ill., had the highest percent of zombie foreclosures at 12.7 percent, followed by Cleveland (10.5 percent); Youngstown, Ohio (9.1 percent); Syracuse, N.Y. (8.8 percent); and Knoxville, Tenn. (8.8 percent).
“Homes abandoned by owners facing a possible foreclosure remain little more than a blip on the radar across the country, as one of the main scourges of the Great Recession continues to show little or no signs of re-emerging,” said Todd Teta, chief product officer with ATTOM Data Solutions. “Even with the slight increase in these so-called ‘zombie foreclosures,’ so far this year, there are still pockets of distress with elevated numbers of abandoned homes. But in yet another reflection of how the national housing market is still booming, you can drive through many towns and not pass a single such property.”
Link copied
Published
Feb 27, 2020
Coming Up See All
Jan
27
Making Money in Non-QM
Webinar
1:00 PM ET
Feb
08
Texas Mortgage Roundup — Austin
Austin, TX
Feb
09
DealDesk Focus on Angel Oak Mortgage Solutions Investor Cash Flow Loans
Webinar
1:00 PM ET
Get the Daily
Advertisement
Advertisement
Analysis and Data
U.S. Housing Market Has Doubled In Value Since The Great Recession