Glenn Stearns Says Communication Key In Times Like These 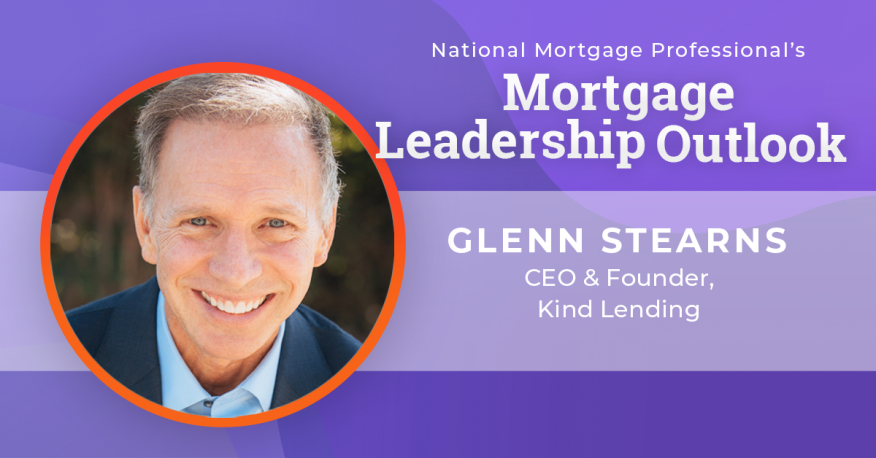 Glenn Stearns, CEO, and founder of Kind Lending, joined Andrew Berman, head of engagement and outreach for National Mortgage Professional magazine, on the April 16 episode of the Mortgage Leadership Outlook series. His primary message was effective communication is needed during the COVID-19 crisis.
The Mortgage Leadership Outlook series helps mortgage professionals find clarity and reassurance during the coronavirus pandemic. Mortgage professionals who appear on the show give insight into current trends in the industry and share predictions of what it might look like once the pandemic has passed.
Stearns is one of the most respected names in the mortgage industry, starting with Stearns Lending LLC that he founded in 1989. He turned it into one of the largest privately-held mortgage companies in the nation for quite some time. In 2014, Blackstone purchased Stearns Lending. Now, with Kind Lending, a new mortgage banking company he founded, Stearns is looking to add fun into lending.

Stearns discussed some of the issues that plagued the industry in 2008. There were multiple issues that his company faced, losing about 85 percent of its revenue. When he looks back to 2008, he had one major lifeline that was almost cut off until he decided to take an overnight flight to meet with the company.
Stearns says in-person conversations with everyone he did business with made all the difference. He was able to overcome all the problems, which seemed large back then. However, in hindsight, they were just problems waiting to be solved.
In terms of customers, Stearns said it was essential to be compassionate with all of them, and that same sentiment goes for the current crisis. He added that it’s also vital to create positivity within the workplace as well.

Launching a new company during COVID-19

Kind Lending was ready to launch, and they decided the timing wasn’t right once the Coronavirus hit. They decided to sit back for a bit, see where everyone else was positioned and how they were overcoming the issues in hopes of being a bit more proactive. The company plans on taking its first loan the week of April 20th, but doing an official launch in May.
His company has also held off on the 50 additional hires they were going to bring on-board. He assured anyone who has submitted a resumé that they are trying to get through them. They do intend to hire more staff once they decide to push through with the launch.
Stearns says the synergy in an office is always important, but he doesn’t believe that the company needs the amount of real estate that he has had in the past. He credited the Blue Sage Mortgage Platform that the company is using. Berman pointed out that it is unique because it combines LOS and CRM functions into one system.
The Kind Lending CEO had more to say about how he develops a company by hiring the experts in each department and much more. However, Stearns says one of the most critical attributes of Kind Lending is that they are trying to develop a fun and happy work environment.
You can watch Stearns’ chat with Berman in the YouTube video below.
Previous guests include Michael Tedesco, Carl White, Barry Habib, Rick Sharga, Gary Malis, Robert Senko, Samir Dedhia, David H. Stevens, Peter Norden, Faith Schwartz, Rob Chrisman, and more. See all the interviews from the Mortgage Leadership Outlook series on its YouTube channel.
Link copied
Published
Apr 17, 2020
Coming Up See All
May
17
OriginatorTech
Virtual
•
11:00 AM ET
May
19
Mastering Cash-out Refis to Drive Volume in Today's Mortgage Market
Webinar
1:00 PM ET
May
24
Suncoast Mortgage Expo
Tampa, FL
Get the Daily
Advertisement
Advertisement
Community
Leading LOs 2022