Quontic Bank Serves The Underserved On The Latest Mortgage Outlook 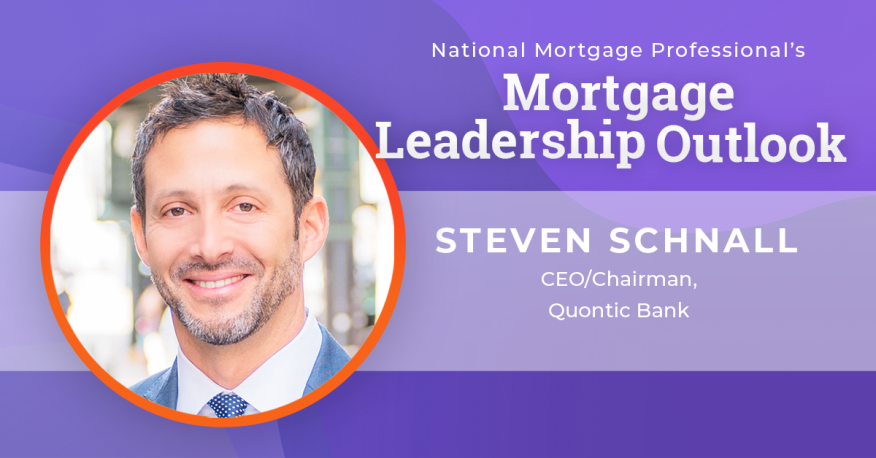 Tuesday’s edition of the Mortgage Leadership Outlook series featured Steven Schnall, CEO and chairman of Quontic Bank, and host Andrew Berman, head of engagement and outreach for National Mortgage Professional magazine, chatting about the state of the industry as the coronavirus pandemic continues to impact the nation.
As the COVID-19 outbreak continues to pose challenges for the mortgage industry, the Mortgage Leadership Outlook series looks to help mortgage professionals navigate through these times of uncertainty.
Schnall joined Berman while hunkered down with a handful of senior execs in Quontic’s 20,000-square-foot offices in Manhattan’s desolate Rockefeller Center, near the epicenter of the coronavirus outbreak.
“Banks are deemed essential so we are allowed to be open,” said Schnall. “We are one of the first banks to deploy a totally remote workforce. We purchased about 100 laptops early on, and as soon as the pandemic started to gain speed, we sent everybody home and we executed pretty well. It’s business as usual.”
Schnall’s Quontic Bank earned the U.S. Department of the Treasury’s designation as a Community Development Financial Institution (CDFI), a certification that allows Quontic to empower low-income and underserved people and communities to enter the financial mainstream.
And while one generally would not consider the Big Apple "low-income," Quontic Bank’s NYC location is among a low-income Census tract, therefore qualifying the bank eligible as a CDFI.
“Believe it or not, Times Square in New York is a low-income Census track,” said Schnall. “There may be billion dollar skyscrapers, but there are also tenements and rent-stabilized housing where people of modest means live. In upwards of 70% of the loans we were making were to people with household incomes of less than 80% of AMI [area medium income] or were from a low income Census tract.”
Schnall got started in the industry upon graduating college in 1992, launching The New York Mortgage Company from his apartment. A few months later, he hired an assistant and rented an office, hired a loan officer and continued to grow the company.
Between 1992 and 2004, Schnall expanded organically, growing The New York Mortgage Company to approximately 1,000 employees and had 65 loan production offices in 25 states, doing in excess of $4 billion in originations per year.
“In 2004, we formed a mortgage REIT, New York Mortgage Trust, and took the company public and formed a mortgage bank as a taxable subsidiary of the mortgage REIT, the thesis being we were going to be the first mortgage REIT that originates and securitizes its own loans,” said Schnall. “It had not been done before that. Of course a few followed as American Home Mortgage did the same, as did MortgageIT.”
Things were going well, but when 2006 rolled around, Schnall began to see some red flags. “We started to get buybacks on some of the ALT-A loans. We never really did sub-prime, but we never had a buyback, maybe one in 12 years, and suddenly in the matter of a few months, we get three buybacks.”
It was evident to Schnall that he needed to exit the Alt-A business, and sold off the company to IndyMac Bank.
After a brief foray into the health club and real estate businesses, in 2009, he returned to the world of finance after identifying a market that required attention, thus establishing Quontic Bank.
“It was a very tough time for people to get a mortgage in 2008-2009,” said Schnall. “There was no Alt-A, no sub-prime, and non-QM was not a thing then. There were a lot of really good lending opportunities to good, creditworthy people who just were disenfranchised by the Dodd-Frank legislation that made it difficult and lenders did not have the appetite. I saw a niche that needed to be served. The idea was that if I was going to do this again, it would not be in the form of a mortgage company.”

►On the benefits of being CDFI-certified: “What we found was, as a CDFI, we were exempt from [ability-to-repay] requirements, while we do not need to collect literally any income documentation whatsoever, and it’s legal for us,” explained Schnall. “With our ATR exemption, even if we don’t collect income documentation, we still have the safe harbor that a fully-compliant QM loan would have.”
►On Quontic Bank’s niche offerings: “We really built our niche around, well, it wasn’t called non-QM when we started it, but the name sort of followed. We believe we have a strong competitive advantage in that area because we don’t have to collect 24-month bank statements, which is arduous and sometimes not helpful to the borrower. A lot of the people we lend to are immigrants. The Asian American community are contributing and pooling resources to buy a home and they often put down 40-50% and have great credit, but it’s hard to figure out how they make their money, as there is more than one person behind the scenes contributing to the household. The CDFI exemption was made for people like that. It was meant to be able to empower people who just don’t fit into a box.”
►On the future of non-QM: “Anyone engaged in non-QM had a nice run until the lights went off. We are still doing non-QM, we have a limited amount on our balance sheet for our no ratio product. We are also, for the first time ever, doing bank statement loans. We weren’t before because we do have some liquidity for bank statement loans. We are just being very cautious now.”
Previous guests in the Mortgage Leadership Outlook series include Mat Ishbia, Christine Beckwith, David Luna, Barry Habib, Rob Chrisman and more. See all the interviews from the Mortgage Leadership Outlook series on its YouTube channel and check out the full episode of Mortgage Leadership Outlook with Schnall and Berman below.
Link copied
Published
May 13, 2020
Coming Up See All
Oct
07
Colorado Mortgage Summit
Denver, CO
Oct
12
California Mortgage Expo – San Francisco
San Francisco, CA
Oct
19
Suncoast Mortgage Expo
Tampa, FL
Get the Daily
Advertisement
Advertisement
Analysis and Data
Sales of New Homes Post 2nd Consecutive Monthly Increase