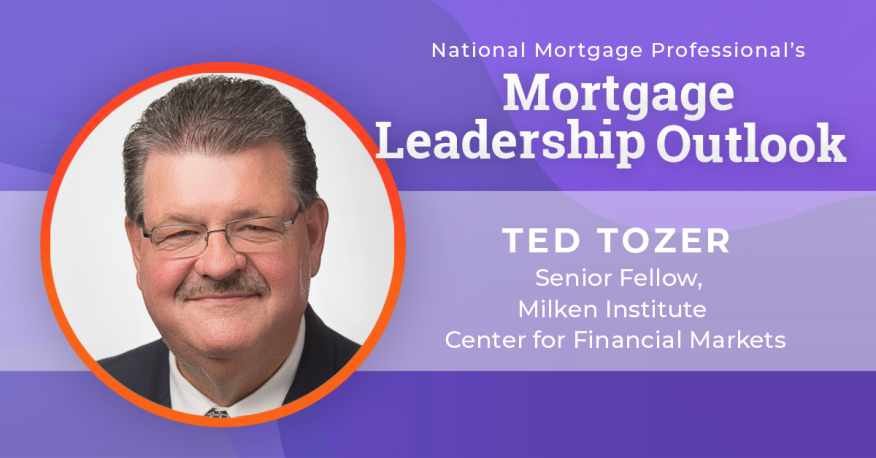 Thursday’s episode of the Mortgage Leadership Outlook series featured Ted Tozer, senior fellow for the Milken Institute Center for Financial Markets. Tozer and series host Andrew Berman, head of engagement and outreach for National Mortgage Professional magazine, discussed the current state of mortgage banking, why there could be a reduction in FHA and VA lending and the amount of lending to people with lower credit scores, the trouble with liquidity, why private-label securities need an overhaul, and much more.
The Mortgage Leadership Outlook series is designed to help you, the mortgage professional, navigate through these times of uncertainty.
Tozer previously served as the president of Ginnie Mae for seven years, and has more than 30 years of experience in the mortgage, banking and securities industries. As president, he managed Ginnie Mae's nearly $1.7 trillion portfolio of mortgage-backed securities and more than $460 billion in annual issuance. Before joining Ginnie Mae, Tozer served as senior vice president of capital markets at the National City Mortgage Company for more than 25 years, overseeing pipeline hedging, pricing, loan sales, loan delivery, and credit guideline exceptions.
In his interview with Berman, Tozer said there are a few options in talks to help the independent mortgage bankers. He questioned whether or not they can become an entity like American Express or Discover, where they do online deposits guaranteed by the FDIC or give them access to the Federal Bank system to borrow funds if they find themselves in financial difficulty. He believes that mortgage banking will be dominated by private sector companies that don’t have any kind of support from the government at all.

►“When I came to Ginnie Mae, there were six issuers that made up maybe 70% of the business,” said Tozer. “You had Bank of America, which is Countrywide, you had Chase, Wells Fargo, GMAC Bank, U.S. Bank. Those guys were two-thirds or three-quarters of the business that Ginnie Mae did. Today, Wells Fargo might be the only bank in the top 10. So, the big difference was the shift. For example, Quicken wasn’t even a Ginnie Mae issuer. They sold all of their loans to Bank of America. People like Penny Mac didn’t exist. So, the difference is the shift in the complexion and composition of the business, not so much the number of issuers.”
►“Independent mortgage bankers, when it comes to the Ginnie Mae side of the business, now make up probably 75% to 85% of their business. The Fannie/Freddie side is probably 50% to 55% of their business. They’re the backbone of mortgage banking. It’s not the banks anymore. Not having the liquidity sources that the banks have, we’re almost back to a 1930s situation before we built all of these protections in for the banks during the Great Depression.” Tozer said that the independent mortgage banker has no backstop for them as far as liquidity.
►Tozer says forbearance makes a lot of sense, but the private-label securities had no ability to evolve in the current market. He added that there were no other options for Congress when it came to forbearance.
►While he pointed out plenty of flaws that need to be addressed, Tozer remained positive about housing in many ways. He said people are still buying homes. With this, Tozer believes that home prices will continue to rise. He remains positive about the refinance market, which is booming thanks to lower rates, helping borrowers save more on their monthly payments. Tozer also said that the increase in demand has helped liquidity because the more money mortgage bankers make, the more cash they are generating.
Previous guests in the Mortgage Leadership Outlook series include Mat Ishbia, David H. Stevens, Barry Habib, Rob Chrisman and more. See all the interviews from the Mortgage Leadership Outlook series on its YouTube channel. Check out the full interview between Berman and Tozer below.
Link copied
Published
May 15, 2020
Coming Up See All
Sep
23
Today’s Borrowers and Their Credit Scores: Findings from a New Research Study
Webinar
1:00 PM ET
Oct
07
Colorado Mortgage Summit
Denver, CO
Oct
12
California Mortgage Expo – San Francisco
San Francisco, CA
Get the Daily
Advertisement
Advertisement
Analysis and Data
RE/MAX Report Shows The Housing Frenzy Is Behind Us