Mortgage rates have hit yet another record low, with the 30-year fixed-rate mortgage averaging 2.65%, according to Freddie Mac's Primary Mortgage Market Survey. This marks the lowest rate in the survey's 50-year history and a 0.02% decline from the previous week.

“A new year, a new record low mortgage rate,” said Sam Khater, Freddie Mac’s chief economist. “Despite a full percentage point decline in rates over the past year, housing affordability has decreased because these low rates have been offset by rising home prices. However, the forces behind the drop in rates have been shifting over the last few months and rates are poised to rise modestly this year. The combination of rising mortgage rates and increasing home prices will accelerate the decline in affordability and further squeeze potential homebuyers during the spring home sales season.” 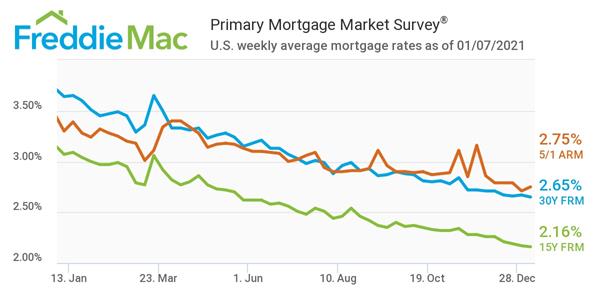