Mitchell Talks Career, Drivers And How Fintech Will Impact Originators 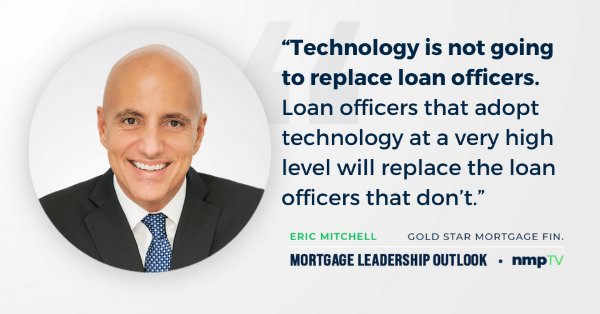 On Wednesday, Feb. 3, the Mortgage Leadership Outlook featured Eric Mitchell, author of “The WHY of MONEY” and executive vice president – National Retail, Gold Star Mortgage Financial Group. Mitchell joined series' host Andrew Berman, head of engagement and outreach for National Mortgage Professional Magazine, as they explore Mitchell's transformation after selling his company, went soul-seeking and wound up in Los Angeles. They also chatted about what motivates Mitchell, his five reasons that drive originators to go from good to great, the possibility of Fintech replacing originators and more.

Mitchell has been with Gold Star Mortgage Financial Group since February 2015. He was named one of NMP's Most Connected Mortgage Professionals in 2018. Mitchell has 30,000 industry LinkedIn connections, 5,000 personal Facebook connections and is a certified master practitioner in neuro-linguistic programming. He negotiated the national agreement between Gold Star and CraigProctor.com, to revolutionize the way Realtors and Loan Officers work together.

See the entire interview between Mitchell and Berman below.