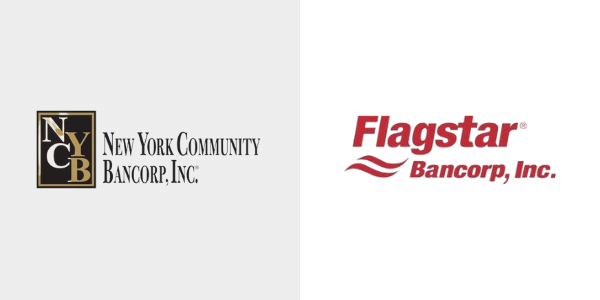 Flagstar Bancorp, Inc.'s stock saw a 4.9% jump following news that it would be merging with New York Community Bancorp, Inc. The two companies entered a definitive agreement for an all stock merger, with the total transaction valued at $2.6 billion.

"Based on Friday's closing prices, that values Flagstar stock at $48.14 each, or a 6.1% premium. The combined bank is expected to have more than $87 billion in assets and nearly 400 bank branches in nine states."

The new company will have over $87 billion in assets and operate nearly 400 traditional branches in nine states. It will also have 87 loan production offices across a 28 state footprint, according to a press release. It will have its headquarters on Long Island, N.Y. with regional headquarters in Troy, M.I., including Flagstar's mortgage operations. The combined company will maintain the Flagstar Bank brand in the Midwest. Flagstar's mortgage division will also maintain the Flagstar brand. Other states will retain their current branding.

"When I was appointed president and CEO of New York Community earlier this year, one of my top priorities was to seek out a like-minded partner that would provide NYCB with a diversified revenue stream, an improved funding mix, and leverage our scale and technology, as we transition away from a traditional thrift model," said Cangemi. "In Flagstar, we have found such a like-minded partner. The combination of our two companies will allow each of us to continue our transformation to a full-service commercial bank by broadening our product offerings while expanding our geographic reach with no branch overlap."‍