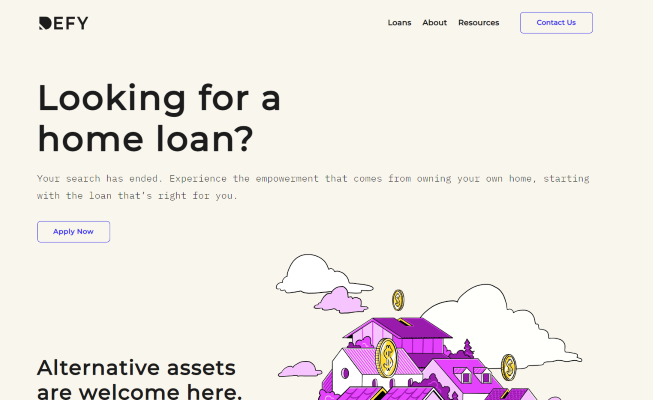 Nashville-based lender to focus on lending to borrowers with non-traditional income streams.

Defy Mortgage on Tuesday announced its launch as a national mortgage lender with a focus on non-qualified (Non-QM) loans.

While the company has announced itself as a national mortgage lender, according to the Nationwide Multistate Licensing System (NMLS) it is currently licensed in just six states: Colorado, Florida, Montana, Oregon, Tennessee, and Texas.

Orlando also is a managing director of Inntum Financial, based in Boca Raton, Fla., which offers investment advice. Before that, according to his LinkedIn profile, he worked in private banking for First Republic Bank, and as a market manager for Wintrust Mortgage. In his LinkedIn profile, Light describes himself as an entrepreneur and as co-founder of two other companies — Pharicode, an IT company, and Glidefast Consulting, a service management consulting firm.

Company leadership said Defy’s challenge to conventional mortgage lending standards is a key to differentiating itself in the current economy. It said it intends to increase homeownership across the country by focusing specifically on consumers who have embraced alternative forms of income.

With the rise of the gig economy, it said, it is taking “a holistic approach” to evaluating a homebuyer’s entire asset portfolio, including cryptocurrency and bitcoin.

“In the wake of a global economic shift in employee preference to work remotely, Defy Mortgage recognizes the need for an innovative, more transparent and open way to lend money to consumers with alternative forms of income,” Orlando said. “We are the best resource for entrepreneurs and solopreneurs to secure a mortgage loan supported by various forms of collateral.”

According to Defy, millions of potential homeowners are sidelined because their income is not recognized as traditional. “Mortgage lending standards are antiquated and most mortgage lenders have not adjusted to the shift from a single income stream to multiple forms of income,” the company said. “Defy Mortgage understands that consumers are working independently and seeking financial flexibility more than ever before.”

“Defy has disrupted the traditional lending model,” Light said. “Anyone with the financial means to pay a mortgage must have options tailored to meet their individual needs.”

The securitization worth $580.47 million is Angel Oak Mortgage Trust's first of 2023.

Loans in the pool were originated primarily by Acra Lending and LoanStream Mortgage.

Industry veteran Danya Sawyer will begin in her new role on Feb. 1.