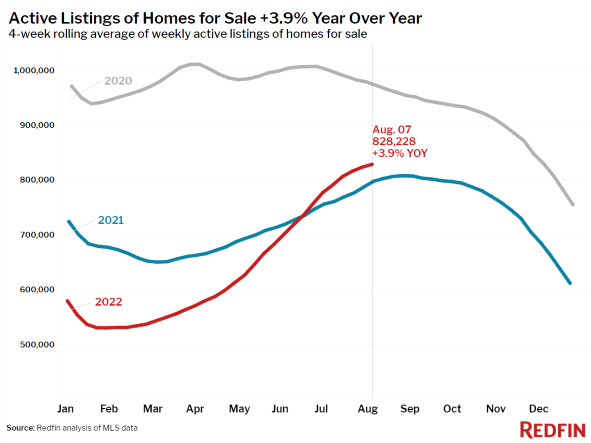 The scales of the housing market are tipping toward buyers.

More homeowners are holding off on selling as the housing market cools, fueling the largest decline in home listings in more than two years, according to a new report from Redfin.

Still, the overall inventory of homes has risen year over year, and that’s giving homebuyers more choices, resulting in the sixth-consecutive monthly decline in competition for the homes that are for sale, according to a separate report from Redfin, the technology-powered real estate brokerage.

Nationwide, 44.3% of home offers written by Redfin agents faced competition on a seasonally adjusted basis in July, compared to a revised rate of 50.9% one month earlier and 63.8% one year earlier, Redfin said.

That’s the lowest share on record, with the exception of April 2020, when the onset of the coronavirus brought the housing market to a near standstill, Redfin said.

The typical home in a bidding war received 3.5 offers in July, compared with 4.1 one month earlier and 5.3 a year earlier, according to data submitted by Redfin agents nationwide. Redfin’s bidding-war data goes back through April 2020.

Homebuyer competition is cooling as more Americans are priced out of the housing market due to higher mortgage rates and inflation, Redfin said. Properties are lingering on the market longer and the housing shortage is easing up, giving buyers more options to choose from and room to negotiate. Some sellers are slashing their asking prices as a result. Roughly 8% of listings on the market each week experience a price cut, the highest share on record.

“The market is wildly different than it was a few months ago. Buyers are competing with one to two other offers instead of four to eight. Some aren’t facing competition at all,” said Alexis Malin, a Redfin real estate agent representing buyers in Jacksonville, Fla. “There’s not the same sense of urgency. House hunters are scheduling tours four days in advance instead of one, and they’re becoming much more selective. If a home doesn’t check all of their boxes, they’re waiting until they find one that does. Six months ago, buyers were taking any house they could get.”

It’s also causing some sellers to delay listing their homes. Redfin said Thursday that new listings of homes for sale dropped 12% year over year during the four weeks ending Aug. 7, the steepest decline since June 2020.

Homeowners are staying put in part, Redfin said, because homebuyer demand has slowed due to higher mortgage rates; pending home sales are down 16% from a year ago. Some homeowners are also experiencing an effect called "rate lock in," in which they're hesitant to buy a new home since it would mean paying a significantly higher mortgage rate, the company said.

And yet, despite the decrease in new listings, the overall housing supply continues to grow — a sign that homebuyers are pulling back more than home sellers, Redfin said. The total number of homes for sale is up 3.8% year over year, good news for the buyers who can afford to remain in the market, because it means the housing shortage is easing and there are more homes to choose from.

“Buyers are backing off due to rising housing costs and sellers are holding back because they realize they won't get the bidding war they would have gotten six months ago,” said Redfin Deputy Chief Economist Taylor Marr. “The good news is, this is bringing balance to the market. If mortgage rates resume their downward trajectory, more buyers and sellers could get back in the game.”

Redfin serves more than 100 markets across the U.S. and Canada and employs over 6,000 people. Its weekly housing market data goes back through 2015.