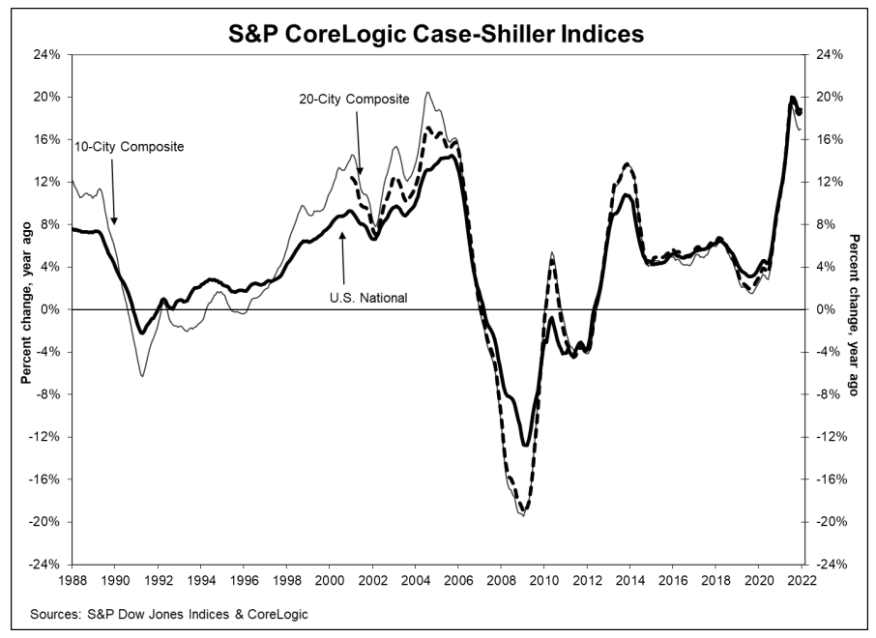 Last year was a standout year for home-price increases, with growth nearing 20% year over year, a rate not seen in 34 years.

That’s according to the S&P CoreLogic Case-Shiller U.S. National Home Price NSA Index, which reported an annual gain in December of 18.8%. While that was the same rate as a month earlier, it was the highest year-over-year gain since 1988.

Craig J. Lazzara, managing director at S&P DJI, said that not only was the annual increase the highest in more than three decades, it also was “substantially ahead of 2020's 10.4% gain.” He said the annual gain for the 20-City Composite was also a record, while the 10-City Composite increase was its “second-best year ever.”

"We have noted that for the past several months, home prices have been rising at a very high, but decelerating rate,” Lazzara said. “The deceleration paused in December, as year-over-year changes in all three composite indices were slightly ahead of their November levels.  December's 18.8% gain for the National Composite is the fifth-highest reading in history.”

He added that S&P DJI continues "to see very strong growth at the city level. All 20 cities saw price increases in 2021, and prices in all 20 are at their all-time highs. December's price increase ranked in the top quintile of historical experience for 19 cities, and in the top decile for 16 of them.”

Phoenix, Tampa, and Miami reported the highest year-over-year gains among the 20 cities in December. Phoenix led the way with a 32.5% year-over-year price increase, followed by Tampa with a 29.4% increase, and Miami with a 27.3% increase. Fifteen of the 20 cities reported higher price increases in the year ending December 2021 compared to the year ending November 2021.

Before seasonal adjustment, the U.S. National Index posted a 0.9% month-over-month increase in December, while the 10-City and 20-City Composites posted increases of 1% and 1.1%, respectively.

After seasonal adjustment, the U.S. National Index posted a month-over-month increase of 1.3%, and the 10-City and 20-City Composites posted increases of 1.4% and 1.5%, respectively.

In December, all 20 cities reported increases before and after seasonal adjustments.

He noted that the strength in the U.S. housing market is being driven in part by a change in locational preferences as households react to the COVID-19 pandemic. “More data will be required to understand whether this demand surge simply represents an acceleration of purchases that would have occurred over the next several years rather than a more permanent secular change,” he said. “In the short term, meanwhile, we should soon begin to see the impact of increasing mortgage rates on home prices."