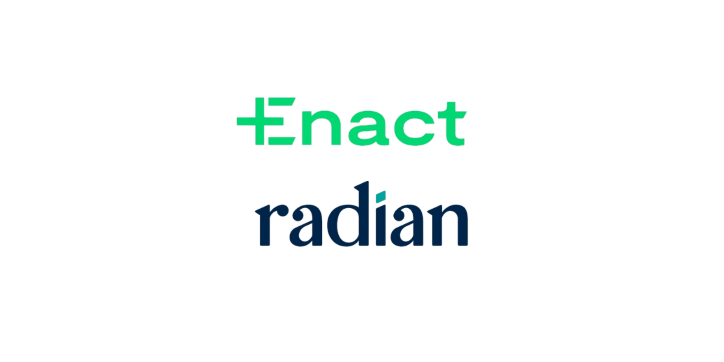 It was a good quarter for mortgage insurance companies.

Enact Holdings Inc., parent of Enact Mortgage Insurance Corp., today reported a 24% increase in net income in the second quarter from the previous quarter, and a 56% increase from the same quarter last year.

At the same time, Radian Group Inc. today posted an 11.1% increase in second-quarter income from the previous quarter, and a 29.6% from the same quarter last year.

"This was another strong quarter for Enact in which we delivered record results,” said Rohit Gupta, president & CEO of Enact. “Our performance reflects the continued execution of our strategy, the strength and resiliency of our business model, and the sustained performance of our outstanding team.”

“While economic uncertainty has increased and mortgage rates have come off historically low levels,” Gupta added, “overall market conditions and the longer-term drivers of demand remain constructive, and we believe we are well positioned to execute on our strategy in a dynamic environment. Going forward, we remain committed to our goal of increasing the accessibility and affordability of home ownership and to driving value creation for all stakeholders.”

The company said 93% of NIW in the second quarter were monthly premium policies, and that 96% were purchase originations.

Primary Insurance-In-Force was $238 billion, up 2% from $232 billion in the first quarter and up 9% from $217 billion in the second quarter of 2021, driven by strong NIW and increasing persistency.

Enact also said that, on June 30, 2022, it entered into a five-year, $200 million senior unsecured revolving credit facility, which it may use for working capital needs and general corporate purposes, including capital contributions to its insurance subsidiaries.

Radian CEO Rick Thornberry said that, "Despite the slowdown in our refinance title volumes, we are seeing growing interest in our home equity products and services from some of the largest financial institutions as they ramp up their home equity lending business,"

Thornberrry expressed optimism about the housing market despite its current headwinds. "We believe that ... the foundation for the overall market remains strong. This is due to the positive dynamics in terms of high credit-quality borrowers, low housing supply, and continuing demand coming from first time home buyers."