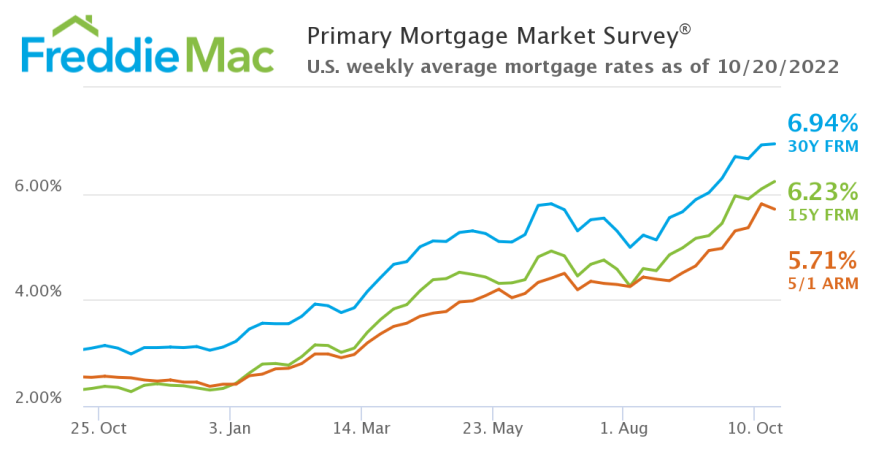 Freddie Mac says the 30-year fixed-rate mortgage is still under 7%; others say it's crossed that threshold.

The average rate for the 30-year fixed continues to climb toward 7%, ticking up slightly again this week.

To consumers, it likely matters little whether the rate is just above or below the mark.

“The 30-year fixed-rate mortgage continues to remain just shy of 7% and is adversely impacting the housing market in the form of declining demand,” said Sam Khater, Freddie Mac’s chief economist. “Additionally, homebuilder confidence has dropped to half what it was just six months ago and construction, particularly single-family residential construction, continues to slow down.”

Some mortgage experts are surprised to see rates this high, especially after things cooled off over the summer. After reaching a high of 5.81%, the average rate for the 30-year fixed mortgage fell as low as 4.99% in early August.

“The end of July we actually had seen a really nice dip in rates, and it seemed like we peaked in June,” said Hammer J. Helmer, founder and CEO of Originator Success.

Other experts, though, said they saw this coming, because inflation remains at its highest level in 40 years.

Now that the Fed is selling off its share of residential mortgage-backed securities, mortgage rates have caught back up to inflation.

So will mortgage rates continue to climb? Habib thinks inflation has peaked, noting that consumer price index (CPI) numbers through October were still compared with low numbers from last year.

He also said that some key information, like shelter, tends to lag, and the CPI numbers are just catching up to where the market’s been. He’s confident next month’s CPI will show improvement, and mortgage rates will also level off.

Helmer agrees. He said rates could trickle up to 8%, but we’re pretty close to the peak so long as inflation has also peaked.

“If we see the inflation, core inflation specifically, (is) not improving, if we see that the labor market still is extraordinarily strong, the rest of the economic reports show that consumer spending — that could actually see mortgage rates push up into 8s,” Helmer said.

That may not be the news borrowers want to hear, but experts say originators can still find opportunities.

Helmer said originators do have to build their customer pool. He also said borrowers will eventually get over their sticker shock once they get used to the idea of a 7% mortgage.

“People go through five stages of grief when rates go up — they get angry, they bargain, they’re in denial, and then they eventually get to acceptance,” he said.

Habib says originators also need to be the experts and explain to clients why now is still a good time to buy. “This is not the time to act out of fear, this is the time to seize an opportunity,” he said.

Rates and prices are likely to stay where they are unless market conditions change. If this means demand stays down, buyers can take advantage by negotiating a lower price.

They can also try to get a rate buydown, lowering their monthly payment in the first year or two. After that, should mortgage rates come back down, borrowers can refinance at the lower rate.

“So you get the house of your dreams, you get it at a better price, you get the payment that you should have had it at anyway,” Habib said. “You didn’t have any of those things last year.”

Habib, though, also points out that things remain fragile. He’s confident in his predictions, but things could be thrown off by another shock to the economy.