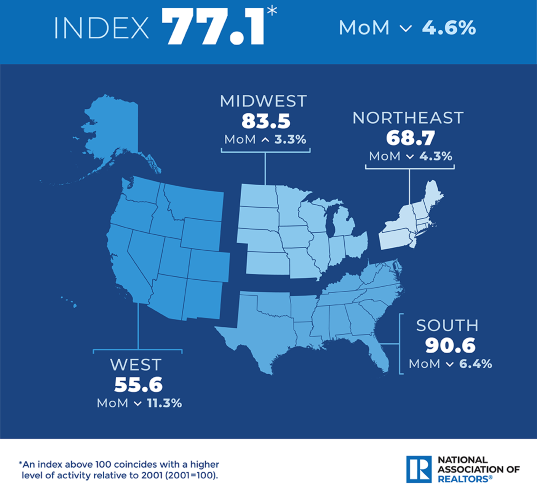 Home sales were down for the fifth consecutive month in October, according to the National Association of Realtors’ (NAR) pending home sales report, and a new report from Realtor.com predicts that the dip will continue into 2023.

The Pending Home Sales Index (PHSI), a forward-looking indicator of home sales based on contract signings, sank 4.6% to 77.1 in October. Year-over-year, pending transactions slipped by 37%. An index of 100 is equal to the level of contract activity in 2001.

"October was a difficult month for home buyers as they faced 20-year-high mortgage rates," said NAR Chief Economist Lawrence Yun. "The West region, in particular, suffered from the combination of high interest rates and expensive home prices. Only the Midwest squeaked out a gain."

"The upcoming months should see a return of buyers," he added, "as mortgage rates appear to have already peaked and have been coming down since mid-November."

The Pending Home Sales Index is a leading indicator for the housing sector, based on pending sales of existing homes. A sale is listed as pending when the contract has been signed but the transaction has not closed, though the sale usually is finalized within one or two months of signing.

Pending contracts are good early indicators of upcoming sales closings, but the amount of time between pending contracts and completed sales is not identical for all home sales, NAR said. Variations in the length of the process from pending contract to closed sale can be caused by issues such as buyer difficulties with obtaining mortgage financing, home inspection problems, or appraisal issues.

The index is based on a sample that covers about 40% of multiple listing service data each month. In developing the model for the index, it was demonstrated that the level of monthly sales-contract activity parallels the level of closed existing-home sales in the following two months, NAR said.

Over at Realtor.com, its projections for 2023 predict prices will rise 5.4% in the 100 largest markets, but so will inventory, which their analysts predicts will increase 22.8%.

"Compared to the wild ride of the past two years, 2023 will be a slower-paced housing market, which means drastic shifts like price declines may not happen as quickly as some have anticipated," said Danielle Hale, chief economist for Realtor.com. "It will be a challenging year for both buyers and sellers, but an important one in setting the stage for home sales to return to a sustainable pace over the next two to three years."

Hale continued, "With mortgage rates continuing to climb as the Fed navigates the economy to a soft-ish landing, higher costs will lead to fewer closings, but that doesn't mean homebuying will stop entirely in 2023. Americans who are determined to make a move will find that staying up-to-date on the market, flexibility, creativity and a healthy dose of patience will go a long way toward success in the year ahead."

Other housing trends identified by Realtor.com include:

"Of the many factors that are expected to affect the housing market in 2023, affordability tops the list of issues most likely to make or break buyers' plans," Hale said. "Still, our forecast does offer promise for home shoppers who are well-prepared."