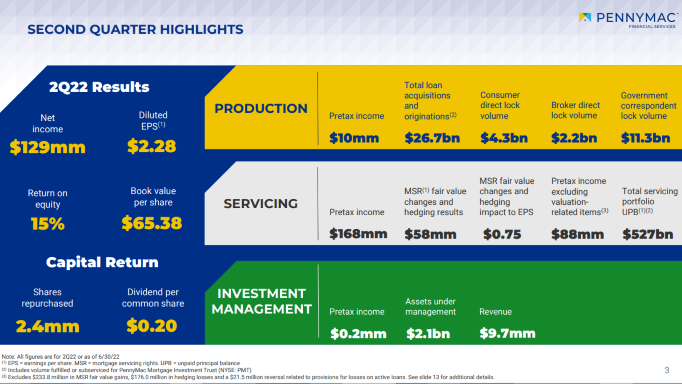 PennyMac Financial Services Inc. is feeling the financial impact of the downturn in the housing market.

The report follows three rounds of layoffs by the California-based company that, combined, eliminated 475 positions. The most recent layoff, on July 18, affected 32 employees. The company had cut 236 and 207 employees in two previous rounds of layoffs.

While Chairman and CEO David Spector described the layoffs as “quick, decisive, and meaningful actions taken … to align our expenses with lower expected levels of activity.” He also said the cuts were difficult even though they were necessary.

“While never easy, we took quick action and made significant reductions in our overall headcount, decreased our marketing spend due to lower expected response rates and returns, and identified and implemented additional efficiencies across the enterprise,” he said. “In fact, we reduced operating expenses by more than $100 million in the second quarter compared to average quarterly 2021 levels, and we expect quarterly operating expenses to decline by another $50 million to $60 million in the second half of 2022.”

PennyMac’s production segment, which includes loan originations and acquisitions, took a significant hit during the quarter. The company reported pretax income for the segment of $9.7 million; while that was up slightly from $9.3 million in the first quarter, it was down 96% from $244.4 million in the second quarter of 2021.

The company attributed the decline primarily to lower volumes as a result of the smaller origination market, which continues to face rising mortgage rates and declining home affordability.

PennyMac said consumer direct interest rate lock commitments (IRLCs) in the quarter totaled $4.3 billion in unpaid principal balance (UPB), down 53% from the prior quarter and 69% from the second quarter last year.

Total loan acquisitions and originations, including those fulfilled for PennyMac Mortgage Investment Trust, were $26.7 billion in UPB, down 20% from the prior quarter and 56% from a year earlier.

Spector said the servicing business continues to grow “organically,” and said its growth “will continue to differentiate (PennyMac) and serve as an important asset while the origination landscape remains competitive and challenging.”

He also noted that the company continues to “prudently manage capital … and in the second quarter we repurchased 2.4 million shares of (PennyMac) common stock at an average price of $46.81, for an approximate cost of $114 million, significantly below current book value per share.”

Spector said that, overall, the second quarter was “another strong quarter” for the company, but added that “we remain diligent in identifying and implementing additional efficiencies across the company while also simultaneously making investments in transformational technology projects we believe will position (PennyMac) for continued success.”