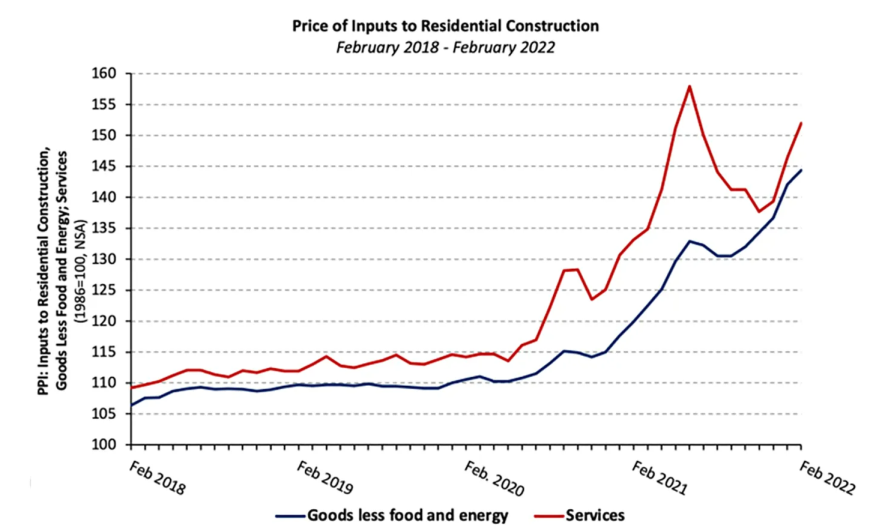 NAHB research shows, however, that the costs for some building materials are experiencing declines.

The cost of building supplies continues to outpace inflation, according to data compiled by the National Association of Home Builders.

Building material prices increased 20.4%, year over year, and have risen 31.3% since January 2020. NAHB based its conclusions on research from the Federal Bureau of Labor Statistics (BLS) for February 2022.

The Producer Price Index (PPI) for softwood lumber, seasonally adjusted, increased 2.6% in February following a combined 28.9% increase over the previous two months, NAHB reported. In six months, prices have increased 79.5%. According to Random Lengths, a company that tracks and analyses data from the lumber industrty, the “mill price” of framing lumber has more than tripled since late August.

The PPI for ready-mix concrete (RMC) rose 0.8% in February after increasing 1.1% in January. The index for RMC has been relatively volatile since mid-2020 and has climbed 8.2%, year over year. Prior to January 2021, year-over-year price increases had not exceeded 8% since December 2006.

Some segments showed declines. Steel mill products prices declined 9.9% in February, the second consecutive decrease after increases in each of the prior 15 months. The last time the steel mill products PPI decreased more than 9% was December 2008. While January and February have been good months for the cost of derivative steel products, the PPI remains 74.4% greater than it was 12 months ago, the NAHB said.

The PPI for gypsum products declined 1.9% in February, snapping an 11-month streak of increases during which the index climbed 31.4%. Gypsum products prices are up 20.7%, year over year. Among other uses, gypsum is found in plasterboard or drywall.