The Federal Reserve lowered the Fed Funds Interest Rate for the first time in 10 years. The decision was based on Economic Data showing slower growth in the US and abroad. Many Economists have asserted that the Fed tightened monetary policy too quickly in 2018 and now they have to backtrack to stave off a recession. Combine higher Interest Rates in 2018, the Chinese Trade War, and escalating Mideast tensions, and you get slower Global Economic growth - possibly a global recession. The Economic data coming out of Europe, China, and the US all point to slowing Economies. What happens Internationally affects the Mortgage Business here at home in our neighborhoods. Lower Interest Rates mean lower payments and increases affordability for Home Buyers. Current Homeowners have the opportunity to lower their existing payments by Refinancing. This means the Mortgage Purchase and Refinance business will stay strong through at least the end of 2019 - hopefully, longer.

Key Economic Data and Events in July 2019
►The Fed lowered the Fed Funds rate by 0.25% after the July 31st FOMC Meeting.
►Additional tariffs were threatened against $300B of Chinese goods starting September 1st.
►The Stock Market set a new record with the DOW hitting an all-time high of 27,359 on July 15th.
►The Economy Added 224,000 New Jobs during June and 164,000 during July.
►Inflation continued to decrease with the CPI at 1.6% YoY.
►US GDP Growth slowed to a 2.1% annualized rate for the 2nd quarter of 2019.

Interest Rates and Fed Watch
The Fed wrapped up its last FOMC Meeting on July 31st, and as expected, they lowered the Fed Funds Interest Rate by 0.25%. What wasn't expected was the statement Chairman Powell said after the meeting. He said this is only a temporary mid-course adjustment and not to expect a "lengthy cutting cycle." The decision to lower rates was not unanimous. Two Fed Governors voted to keep rates unchanged - they felt the Economy is strong and Inflation will soon be rising. Chairman Powell didn't elaborate on the Fed's next move but kept the door open for another rate cut this year. He said they were keeping an eye on global growth, trade tensions, and US Economic Data to determine when and what to do next. The next FOMC Meeting is September 17th and 18th. Fed Watchers expect another .25% rate cut before year-end.

GDP Economic Data Released in July 2019
The First Estimate of 2nd Quarter 2019 GDP showed the Economy expanded at a 2.1% annual rate (1.8% expected). Even though this data beat expectations, it's an ominous sign the US Economy is slowing down faster than we thought. The big drag on GDP was reduced business and residential investment. That was offset by an increase in Consumer Spending of 4.3% and Government spending by 5.0%. The Trade War is taking a toll - reducing GDP growth by an estimated 1.0%. The latest GDP data gives the Fed additional justification for this month's and future Interest Rate reductions.

Consumer Economic Data Released in July 2019
Consumer Economic Data was all green this month as Consumer Confidence, Consumer Sentiment, and Retail Sales all pointed up. Consumers returned to the stores in the 2nd quarter after guarding their wallets in the 1st quarter. The low Retail Sales data in the 1st quarter was probably affected by the government shutdown with Federal Employees going unpaid for a few months. However, the Retails Sales rebound in the 2nd quarter was partially due to pent up demand once Federal Employees started getting paychecks again. Plus, Consumers are generally encouraged to spend more when the stock market is doing well and interest rates are lower.
►Retail Sales rose 0.4% in June, up 3.4% in the last 12 months.
►Consumer Confidence Index rose to 135.7 from 121.5 the prior month.
►Consumer Sentiment Index (U of M) rose to 98.4 from 98.2 the prior month.

Energy, International, and Things You May Have Missed
►Oil Prices bounced around but remained unchanged in July. Volatility was due to Mideast tensions with Iran and declining US stockpiles. (Prices as of August 3rd: North Sea Brent Crude about $62 per barrel, West Texas Intermediate Crude about $56 per barrel).
►The IMF (International Monetary Fund) lowered its forecast for 2019 Global Economic Growth (again) to 3.2% from 3.3% while also raising its forecast for US Economic Growth to 2.6% from 2.3%.
►Boris Johnson took over as the UK's new Prime Minister.
►Prospects of a "No Deal Brexit" have increased. UK Prime Minister Johnson said he would leave the EU on October 31st - with or without an agreement.
►Protests in Hong Kong continued into the second month. 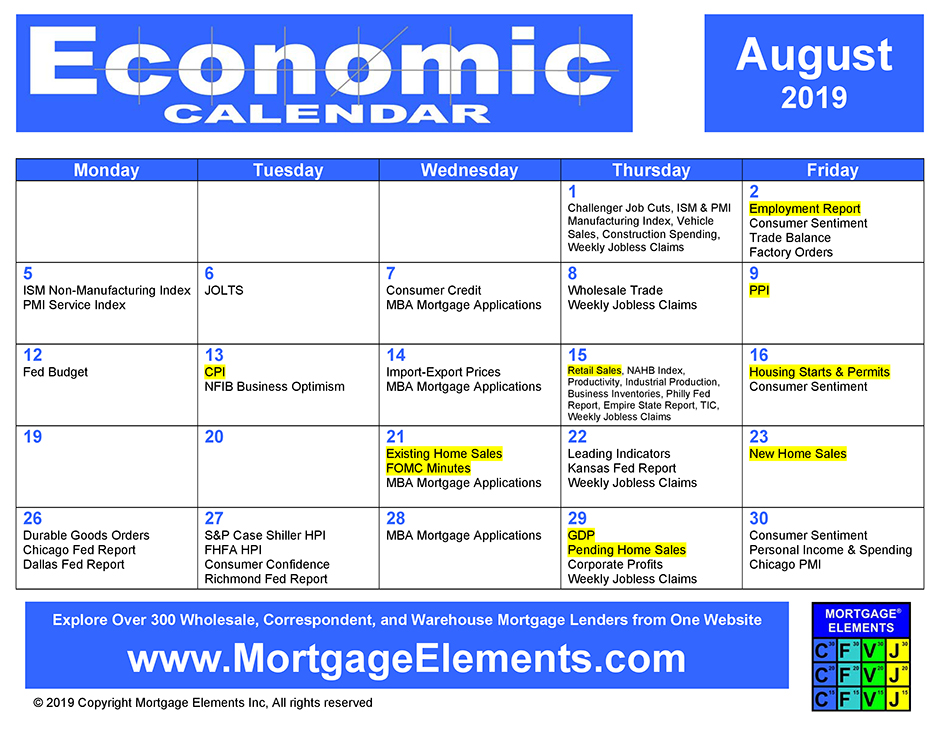 This Economic Commentary is written to be a succinct summary of the key Economic Indicators and Economic Data that influence the Mortgage and Real Estate Industries. It is written for Mortgage Professionals that need to stay current on Economic Information but don't have hours to research and analyze Economic Data. Feel free to share this with a friend or colleague in the Mortgage or Real Estate business. Visit MortgageElements.com where you can explore over 300 Wholesale, Correspondent, and Warehouse Mortgage Lenders from one website.
Mark Paoletti, President and Founder of MortgageElements.com, may be reached by e-mail at [email protected].
This newsletter is for informational and educational purposes only and should not be construed as investment, legal, financial, or mortgage advice. The information is gathered from sources believed to be credible, some is opinion based and editorial in nature. Mortgage Elements Inc. does not guarantee or warrant its accuracy or completeness, and there is no guarantee it is without errors. This newsletter is created for use by Mortgage and Real Estate Professionals and is not an advertisement to extend credit or solicit mortgage originations.
Link copied
Published
Aug 06, 2019
Coming Up See All
Jul
06
Mortgage Star for Women
New Orleans, LA
Jul
07
Ultimate Mortgage Expo
New Orleans, LA
Jul
21
Arizona Mortgage Expo
Chandler, AZ
Get the Daily
Advertisement
Advertisement
Analysis and Data
Construction Spending Dips 0.1% In May, 1st Decline In 8 Months