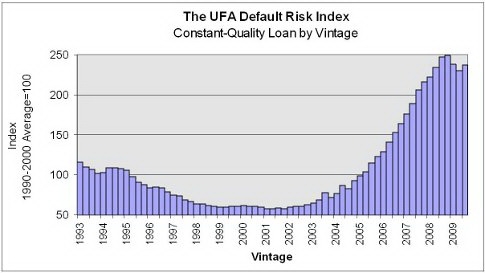 The UFA Default Risk Index for the third quarter of 2009 rose to 237 from last quarter’s revised 230, but remains below the 2008 Q4 peak. After extraordinary price declines in many housing markets around the country, one might expect improvement in UFA’s forward looking Default Risk Index. Unfortunately, steep increases in unemployment are almost fully offsetting the positive effects of lower, and in some areas, stabilizing house prices. The Index illustrates the important role that local economic conditions have played in this credit cycle since loan, borrower and collateral characteristics are held constant over time in the Index. Under current economic conditions, non-prime investors and lenders should expect defaults on loans currently being originated to be 137 percent higher than the average of loans originated in the 1990s. That’s a key finding of the latest UFA Mortgage Report by University Financial Associates of Ann Arbor, Michigan. Figure 1: The UFA Default Risk Index stands at 237, estimating the risk of default on newly originated non-prime mortgages at 137 percent higher than the average of the 1990s. “Plummeting house prices from overvalued levels interacting with questionable underwriting practices have been the primary driver of defaults to date in this credit cycle,” says Dennis Capozza, professor of finance with the Ross School of Business at the University of Michigan and a founding principal of UFA. “As house prices return to more sustainable levels, we are transitioning to a phase where high unemployment rates will exacerbate the level and extend the period of elevated foreclosures.” The UFA Default Risk Index measures the risk of default on newly originated nonprime mortgages. UFA’s analysis is based on a “constant-quality” loan, that is, a loan with the same borrower, loan and collateral characteristics. The Index reflects only the changes in current and expected future economic conditions, which are much less favorable currently than in prior years. Each quarter, UFA evaluates economic conditions in the United States and assesses how these conditions will impact expected future defaults, prepayments, loss recoveries and loan values for nonprime loans. A number of factors affect the expected defaults on a constant-quality loan. Most important are worsening economic conditions. A recession causes an erosion of both borrower and collateral performance. Borrowers are more likely to be subjected to a financial shock such as unemployment, and if shocked, will be less able to withstand the shock. Fed easing of interest rates has the opposite effect. The UFA Mortgage Report is a unique analysis that has successfully predicted such developments as the increased defaults in Southern California in the mid-90s and the current increases in defaults. Its predictions are based on an extensive analysis of local economic conditions in each state and the relationship of those conditions to loan profitability. The historical record of millions of mortgage loans is studied each quarter to assess the vulnerability of each state to loan losses and prepayments. For more information, visit www.ufanet.com/nmr.htm.
Link copied
Published
Aug 26, 2009
Coming Up See All
Feb
14
Texas Mortgage Roundup — Austin
Austin, TX
Mar
01
Atlanta Mortgage Expo
Atlanta, GA
Mar
15
Mid-South Mortgage Expo
Nashville, TN
Get the Daily
Advertisement
Advertisement
Regulation and Compliance
Fed Slows Rate Hike Pace, OK’s 0.25% Bump