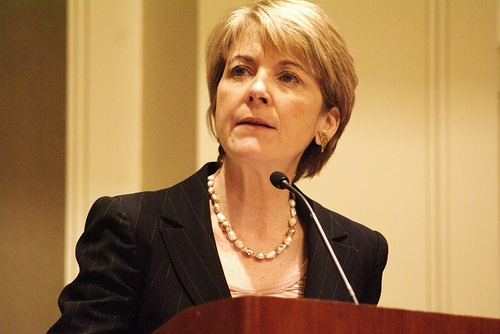 Massachusetts Attorney General Martha Coakley has filed a lawsuit in Suffolk Superior Court against five national banks, Bank of America, Wells Fargo, JP Morgan Chase, Citi and GMAC Mortgagein connection with their roles in allegedly pursuing illegal foreclosures on properties in Massachusetts, as well as deceptive loan servicing. The suit also names Mortgage Electronic Registration System Inc. (MERS) and its parent, MERSCORP Inc., as defendants. “The single most important thing we can do to return to a healthy economy is to address this foreclosure crisis,” said AG Coakley. “Our suit alleges that the banks have charted a destructive path by cutting corners and rushing to foreclose on homeowners without following the rule of law. Our action today seeks real accountability for the banks illegal behavior and real relief for homeowners.” In the complaint, AG Coakley alleges these five entities engaged in unfair and deceptive trade practices in violation of Massachusetts’ law by: ►Pervasive use of fraudulent documentation in the foreclosure process, including so-called “robo-signing”; ►Foreclosing without holding the actual mortgage (“Ibanez” violations); ►Corrupting Massachusetts’ land recording system through the use of MERS; ►Failing to uphold loan modification promises to Massachusetts homeowners. According to the complaint, the banks used false documentation in the foreclosure process, including robo-signing, whereby bank personnel signed affidavits that were untrue, or not based on the signor’s actual knowledge. An entity wishing to foreclose on a property must demonstrate it has filed an affidavit in compliance with Massachusetts law. By October 2010, the banks’ flagrant disregard of affidavit and notary process requirements became widely known. Filings with various Registers of Deeds provided to the Attorney General’s Office revealed the pervasive use of mortgage service employees to sign hundreds of affidavits and sworn statements without personal knowledge of the information contained in those affidavits. Evidence also suggests these practices were not confined to the foreclosure process, but also used in the assignment, transfer and modification of mortgages secured by property in Massachusetts. The suit also alleges that the five entities participated in unlawful foreclosures when they commenced foreclosures on mortgages where they were not the holders of those mortgages. The Supreme Judicial Court (SJC), in Commonwealth v. Ibanez, recently upheld Massachusetts law and stated that “only the present holder of a mortgage is authorized to foreclose on the mortgaged property.” The complaint alleges that these entities ignored this fundamental legal mandate and proceeded to foreclosure even though they did not hold the mortgage, and thus had no legal authority to conduct the foreclosure. The banks’ failure to obtain a valid assignment of the mortgage prior to foreclosure has adversely impacted titles to hundreds, if not thousands, of properties in the Commonwealth. The complaint alleges that the banks falsely claimed to be the holder of a mortgage in several foreclosure documents even though they failed to obtain a valid assignment of the mortgage. The complaint also alleges that these banks have undermined our public land record system through the use of MERS, a private electronic registry system. According to the complaint, the creation and use of MERS was adopted by these defendants primarily to avoid land registration and recording requirements, including payment of recording and registration fees, and to facilitate sales of mortgage loans. The use of MERS has resulted in a lack of transparency as to the entities that have the legal authority to enforce mortgages, and unfairly conceals from borrowers the true identity of the holder of the debt. Since 1997, more than 63 million home loans have been registered on the MERS System, accounting for more than 60 percent of all newly-originated mortgage loans. The complaint also alleges that through the use of the MERS system, the banks unlawfully failed to register assignments of mortgages and transfers of the beneficial interests in mortgages. Finally, the complaint alleges the banks deceived and misrepresented to borrowers the process, requirements, and availability of loan modifications. The banks publically claimed to be engaged in widespread loan modifications aimed at preserving home ownership and avoiding unnecessary foreclosures. Through the National Homeownership Retention Program, which commenced on Nov. 6, 2008, these banks represented that they would work with borrowers to help them avoid unnecessary foreclosures by reducing monthly mortgage payments to affordable and sustainable levels. The complaint alleges these banks misled borrowers about their eligibility for this program and the amount of relief available, failed to achieve a significant level of modifications, and often strung along borrowers for months in trial modifications that were ultimately rejected. The AG’s lawsuit seeks civil penalties, restitution for harm to borrowers and compensation for registration fees that were avoided. The lawsuit also seeks to hold the banks accountable through permanent injunctive relief to provide a solution for prior unlawful foreclosures and to require that the banks, going forward, register assignments and other documents in accordance with Massachusetts law. The lawsuit follows more than a year of negotiations with the banks over a 50-state settlement focused around the issues of fraudulent documents, including “robo-signing.” AG Coakley had made clear that she would not sign on to an agreement with the banks if it included broad liability release regarding MERS and other issues or if she did not believe the banks had come to the table with an offer in the best interest of Massachusetts.
Link copied
Published
Dec 02, 2011
Coming Up See All
Dec
09
California Mortgage Expo – Irvine
Irvine, CA
Jan
13
Non-QM Summit
Uncasville, CT
Jan
14
New England Mortgage Expo
Uncasville, CT
Get the Daily
Advertisement
Advertisement
Industry News
loanDepot And mellohome's 'Grand Slam' Experience Builds Momentum