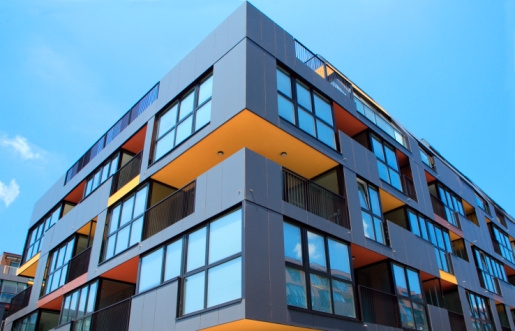 The Multifamily Production Index (MPI), an indicator for the multifamily market released by the National Association of Home Builders (NAHB), recorded its highest reading since the third quarter of 2005 with an index level of 51. The MPI, which measures builder and developer sentiment about current conditions in the multifamily market on a scale of 0-100, rose from 49 in the fourth quarter to 51 in the first quarter. This is the seventh consecutive quarter that the MPI has increased. The MPI provides a composite measure of three key elements of the multifamily housing market: Construction of low-rent units, market-rate rental units and "for-sale" units, or condominiums. The index and all of its components are scaled so that any number over 50 indicates that more respondents report conditions are improving than report conditions are getting worse. In Q1 of 2012, the MPI component tracking builder and developer perceptions of market-rate rental properties recorded an all-time high of 69, while low-rent units dipped slightly to 53. For-sale units increased to 37, which is the highest reading for this component since the fourth quarter of 2005. "In spite of continuing difficulties in the capital markets, it appears that new construction is underway," said W. Dean Henry, president of Legacy Partners Residential in Foster City, Calif., and chairman of NAHB's Multifamily Leadership Board. "This is certain to help satisfy some of the pent up demand that has occurred over the past several years." The Multifamily Vacancy Index (MVI), which measures the multifamily housing industry's perception of vacancies, dropped to a level of 31, the lowest recording since the inception of the index in 2003. With the MVI, lower numbers indicate fewer vacancies. The MVI has decreased considerably in the last three years, after peaking at 70 in the second quarter of 2009. "Multifamily construction continues to be a bright spot in the overall housing market," said NAHB Chief Economist David Crowe. "However, as indicated by the MVI, demand for apartments is now quite high, and production is still very low in a historic context and in the context of what we project is necessary to meet long-term demand." Historically, the MPI and MVI have performed well as leading indicators of U.S. Census figures for multifamily starts and vacancy rates, providing information on likely movement in the Census figures one to three quarters in advance.
Link copied
Published
Jun 07, 2012
Coming Up See All
Dec
01
How to Qualify Foreign National Borrowers with Acra Lending's Investor Cash-Flow Program
Webinar
1:00 PM ET
Dec
02
Certified Military Home Specialist Course - Basic Training
Webinar
11:00 AM PT / 2:00 PM ET
Dec
07
OriginatorTech
Virtual
•
11:00 AM ET
Get the Daily
Advertisement
Advertisement
Analysis and Data
Forbearance Exits Mount, But Foreclosure Activity Remains Muted