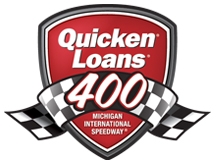 Quicken Loans Inc. has announced it has again partnered with Michigan International Speedway (MIS) in Brooklyn, Mich., to sponsor the Quicken Loans 400 NASCAR Sprint Cup Series race on Sunday, June 16. Detroit-based Quicken Loans was a sponsor of the same race in 2012, which saw driver Dale Earnhardt Jr. break his 143-race winless streak. “Last year’s race was extremely exciting, and I know a lot of fans were thrilled to see Dale Jr. bring home the Quicken Loans 400 trophy,” said Jay Farner, president and chief marketing officer for Quicken Loans. “We look forward to another exciting race this year at NASCAR’s fastest track.” Along with its renewed sponsorship of the Quicken Loans 400, Quicken Loans is the primary sponsor of Stewart-Haas Racing’s No. 39 team and driver Ryan Newman for 18 Sprint Cup races, and an associate sponsor for the remainder of the season. The company also serves as an associate sponsor of three-time Sprint Cup champion Tony Stewart and Sprint Cup rookie-of-the-year candidate Danica Patrick, both of whom are teammates with Newman at Stewart-Haas Racing. “As the nation’s largest online mortgage lender, helping families meet their home financing needs is our top priority.  With the Quicken Loans 400 being held on Father’s Day again this year, we are excited to also help bring families together to celebrate at the track while watching a great race,” Farner added. Newman, who has two Sprint Cup wins and two NASCAR Nationwide Series wins at MIS and calls MIS his home track, is looking forward to driving in his sponsor’s race again this year.  “Michigan International Speedway is always a track I circle on the calendar,” Newman said. “That it’s the Quicken Loans 400 makes it even more special. Between the speeds we have at the track and these new Gen-6 cars, I think the racing will be fantastic. Plus, you know I’ll be pushing hard to bring that QL trophy home, especially since it’s in Quicken Loans’ backyard.”
Link copied
Published
Feb 01, 2013
Coming Up See All
Jan
26
Mortgage Leadership Outlook: Karl Jacob
Facebook Live
•
1:00 PM PT
Jan
27
Making Money in Non-QM
Webinar
1:00 PM ET
Feb
08
Texas Mortgage Roundup — Austin
Austin, TX
Get the Daily
Advertisement
Advertisement
Community
LendingTree Inc. Ushers In New Generation Of Leaders