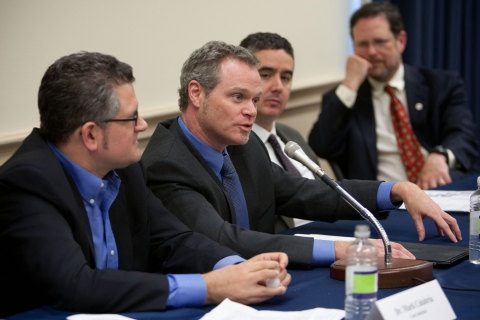 According to a recent panel of housing and mortgage experts, first-time homebuyers in today’s market face a distinct set of challenges, but the opportunity for growth within the segment exists if new regulations are shaped carefully. This consensus was a focus of the fourth annual homeownership panel, hosted by Radian Guaranty on Feb. 15, 2013, in Washington, D.C. The event on Capitol Hill entitled “Homeownership: Supporting First-Time Homebuyers,” brought together industry experts to examine the impact of pending regulations and key legislation, as well as the importance of supporting first-time homeownership for the health of the housing market as a whole. The panel included an audience of congressional, federal agency and association staffers, and was moderated by Teresa Bryce Bazemore, president of Radian. Award-winning and nationally syndicated Washington Post real estate columnist Ken Harney provided opening remarks. The featured panelists included four notable experts in the housing and mortgage industries: Mark Calabria, director of financial regulation studies for the CATO Institute; Mark Fleming, chief economist for CoreLogic; Michael Fratantoni, vice president of single-family research and policy development for the Mortgage Bankers Association; and Barry Zigas, director of housing policy for the Consumer Federation of America. Ken Harney and Teresa Bryce Bazemore get caught up before the start of the panel discussion. (Photo: Radian Group Inc.) Overall, the panelists agreed that the first-time homebuyer segment is not recovering at the same rate as other segments of the housing market, and it is crucial to keep this group of buyers in mind when developing housing policy. According to Harney, “The first-time homebuyer market is essential to the function of the system as a whole. Based on historical norms, we have a net deficit of homebuyers now, with underwriting standards becoming very tough and student debts serving as a major obstacle.” Central to the panelists’ discussion was the impact of the Qualified Mortgage (QM) rule on lenders and consumers, as well as the implications of the pending Qualified Residential Mortgage (QRM) standards aimed at risk retention. In general, the panelists were in agreement that aligning the QRM standards with the recently released QM standards and ending an ongoing period of uncertainty would be most beneficial to the market. Fratantoni stated, “The most important thing to look at moving forward is household formation. We had a period of decline as young 20-somethings moved back in with their parents and households doubled up. Now those people are turning to rentals, just as rents are going through the roof, which means market dynamics are favorable for a rebound in first-time buyers.” Notably, panelists expressed concern that strict downpayment requirements as an element of the QRM rule would create a barrier for otherwise-qualified homebuyers, since coming up with a significant downpayment is the biggest obstacle for many first-time buyers, while not effectively minimizing the risk of default. “Delinquencies result from a number of factors, not solely the downpayment, but usually a combination of downpayment and very poor credit quality,” said Calabria. Fleming agreed with this sentiment, adding, “We have to understand there is a risk in not requiring a big downpayment, but mitigate that risk by making sure on the front end that borrowers have a good chance of making their mortgage payment even if something bad happens in their life, like a job loss.” “There’s a level of fear that we’re creating what will become a standard in the underwriting system that makes it harder for consumers to get a loan,” said Barry Zigas of the Consumer Federation of America. “We should be more concerned with consumer access to credit than a requirement for down payment. We have to weigh the benefits of these requirements against the cost to the system and decide how far we’re willing to go in closing off credit to many in order to prevent foreclosure for a few.” “For four years, Radian has had the privilege of gathering some of the brightest minds in the industry in one room for a collaborative discussion of the most pressing issues in the housing market,” said Bazemore. “Right now, policymakers are faced with the challenge of striking the delicate balance between protecting mortgage lenders and encouraging safer lending decisions, and ensuring eligible borrowers can still secure a mortgage. It’s a highly complex process that requires bipartisan coordination across all fronts.” Panelists included, from left: Mark Calabria - Director of Financial Regulation Studies, The CATO Institute; Mark Fleming - Chief Economist for First American, CoreLogic; Michael Fratantoni - Vice President of Single-Family Research and Policy Development, Mortgage Bankers Association; and Barry Zigas - Director of Housing Policy, Consumer Federation of America (Photo: Radian Group Inc.)
Link copied
Published
Mar 14, 2013
Coming Up See All
Jan
26
Mortgage Leadership Outlook: Karl Jacob
Webinar
1:00 PM PT
Jan
27
Making Money in Non-QM
Webinar
1:00 PM ET
Feb
08
Texas Mortgage Roundup — Austin
Austin, TX
Get the Daily
Advertisement
Advertisement
Analysis and Data
Funding For Multifamily Affordable Housing Reaches Its Highest Volume In 2021