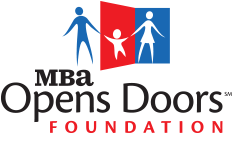 The Mortgage Bankers Association (MBA) has announced E.J. Burke, the former chairman of MBA, and his wife, Martha Burke, have been awarded the “MBA Opens Doors Foundation Community Champion Award.”  The Award recognizes those who have dedicated significant time and effort to advance the foundation’s mission to enable families with a critically ill or injured child to keep their home, even in the face of significant medical bills.

“I am thrilled to present the 2014 MBA Opens Doors Foundation Champion Award to E.J. and Martha Burke,” said Debra Still, CMB, chairman of the MBA Opens Doors Foundation. “Mr. and Mrs. Burke have gone above and beyond to contribute to the Foundation. As anyone who attended MBA’s CREF Convention last year can attest, even the Burke’s daughters got into the act of supporting Opens Doors, drawing a direct line from their family to the very people our Foundation was created to help. The Burke’s leadership within the organization and personal generosity has made it possible for us to keep more than one hundred families in their homes during their time of need. I applaud their efforts and thank them for all they have done.”

The MBA Opens Doors Foundation was launched in October 2011, with an initial start-up contribution of $50,000 from the Mortgage Bankers Association and with MBA covering all administrative costs of the Foundation. The Foundation’s two initiatives assist families with critically ill or injured children by providing mortgage or rental assistance grants to help them keep their homes in the face of significant medical expenses. Having begun by serving families in the Washington, D.C. area, MBA Opens Doors has established a sound operational framework that will enable the Foundation to expand across the United States.