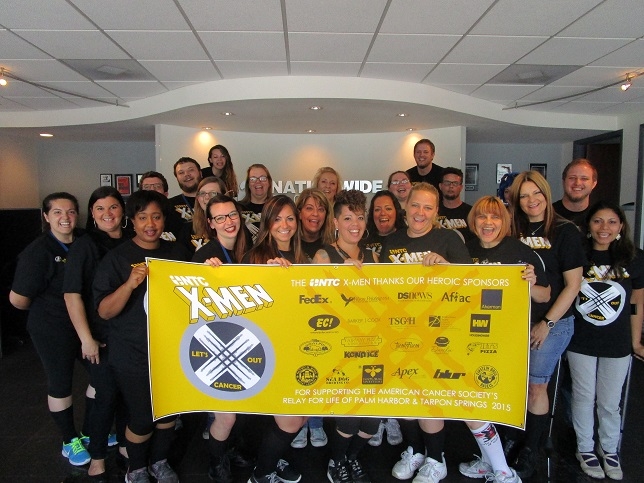 Palm Harbor based research and document processing company Nationwide Title Clearing Inc. (NTC) raised more than $12,000 for the fight against cancer during the company's participating in Relay for Life Palm Harbor and Tarpon Springs in late April. A total of 31 teams and 337 participants raised $56,183.59. Relay for Life is the American Cancer Society's signature fundraising event and to date, Relay for Life has raised over $5 billion for the American Cancer Society. Throughout the company's six year history of participating in Relay for Life, NTC has been able to raise a lifetime total of $67,000.29 to help fund cancer research.

The theme for this year's Relay for Life Palm Harbor and Tarpon Springs was superheroes, and NTC represented the company as the “NTC X-Men” lead by team captain Erika Lance. The six-hour event began at 6:00 p.m. at Palm Harbor University High School and continued through the evening to symbolize how “cancer never sleeps.” NTC came in as Relay for Life Palm Harbor and Tarpon Springs' third-highest fundraising team after hosting multiple events including a corn toss tournament, a bingo night and a Valentine's Day bake sale to meet its fundraising goal.

“It's overwhelming to think that millions of people will be diagnosed with cancer this year. It might be someone close to us—or you or me,” said Temple. “A Relay For Life event gives us the power to fight back.”

Involvement with Relay for Life has become a backbone of NTC's corporate social responsibility (CSR) initiatives. While NTC participates in many community events throughout the year, Relay for Life is the largest employee-volunteer event that NTC sponsors, and employee involvement has grown each year.

“It is a privilege to be able to continue our commitment to being responsible corporate Palm Harbor citizens through an event we are all passionate about,” said Lance.

Participating in Relay for Life is a meaningful activity as many NTC staff members have experienced the loss of a loved one due to cancer, including Lance. Lance's mother passed away from breast cancer over 15 years ago.

“Every year, it seems like I am speaking with, or consoling friends on the loss of someone from this horrible disease,” said Lance. “I would like nothing more than to instead celebrate another birthday or another year of life because they were able to beat their illness.”

The American Cancer Society estimates more than 1.6 million new cases of cancer will be diagnosed in 2015 and the World Health Organization projects that “without immediate action, the global number of deaths from cancer will increase by nearly 80 percent by 2030.” In order to fight against these statistics, NTC participated in the most personal of the company's CSR activities, Relay for Life.