NMP’s Literary Corner: Hidden in Plain Sight: What Really Caused the World’s Worst Financial Crisis and Why it Could Happen Again By Peter J Wallison 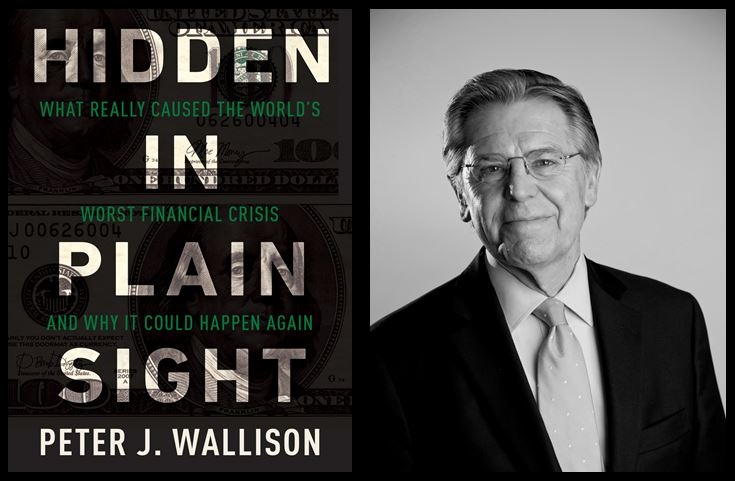 If Chairman Phil Angelides and the other members of the Federal Crisis Inquiry Commission (FCIC) aren’t already shaking in their shoes, they should be. Former FCIC member Peter J. Wallison’s book, Hidden in Plain Sight: What Really Caused the World’s Worst Financial Crisis and Why it Could Happen Again, about the cause of the financial crisis exposes the Commission’s collective stupidity in not examining to any extent the critical role housing finance played in the crisis, even though it was common and widespread knowledge that it was the mortgage market meltdown that took down the economy and led to the Great Recession from which we are only now, nearly seven years later, still recovering

The brilliant attorney that he is, Wallison deftly pieces together the story of the financial crisis, a narrative that cogently points out the many errors of both federal housing policy and the FCIC. In 14 detailed and cleverly-crafted chapters, the case against the Democratic Congress’s legislative response—The Wall Street Reform and Consumer Protection Act of 2010—and both the Commission’s majority report and less directly minority report are laid out and slowly discredited throughout 361 well-annotated pages that produce 30 pages of notes. Deregulation, shadow banking, credit default swaps, securitization, CDOs, credit rating agencies and predatory lending are each examined and discarded as first-cause causes.

The Democratic Congress and the Angelides Commission both blamed the crash on a lack of regulation of mortgage lenders and Wall Street.

Not so argues Wallison in Hidden in Plain Sight. What really caused the financial crisis was the same reason that Fannie Mae and Freddie Mac became insolvent: Too many weak and non-performing mortgages. And the central fact: In the quarter before being put into conservatorship, the government housing agencies together guaranteed 23.8 million of the 31 million of such loans outstanding. The total number of mortgages outstanding as of June 30, 2008 was 55 million. In other words, 57 percent of all mortgages outstanding were not prime loans and of those, the two GSEs, the FHA and CRA lenders accounted for 77 percent. Fannie Mae and Freddie Mac alone guaranteed 16.5 million or 69 percent of the 31 million. How this all came to pass is the focus of Wallison’s research.

The book is divided into four parts. Part 1 covers “The Basics,” his premise as to what caused the financial crisis, the difference between prime and non-prime mortgages, the FCIC’s investigation and conclusions, and a brief post-Depression history of housing finance in the U.S. Each of these topics is examined in some detail.

The chapter on the FCIC smacks the Commission, and especially its chairman Angelides, upside the head with a proverbial two-by-four. According to Wallison, the Commission was led from the beginning to consider only one theory: “The crisis was caused by the risk-taking and greed of the private sector and could have been prevented … with more regulatory control of the financial system.” Moreover, he adds, Angelides repeatedly undercut the inquiry by: providing the Republicans with only one of the commission’s 80 staffers and none for interviewing witnesses, conducting research, and drafting the report; failing to inform commissioners about who was being interviewed; precluding the commissioners from cross-examining the witnesses; and never objecting to the Congress’s passage of legislation to address the causes of the crisis six months before the Commission issued its final report on causation, thereby undermining the Commission’s efforts.

Part III, “The Financial Crisis and its Accelerants,” explains the decade-long run up in house prices; the failure of Fannie and Freddie to fully and truthfully disclose the real composition of their mortgage holdings; how 31 million—to use the author’s term, non-traditional mortgages (NTMs)—came into being; and the role of fair-value or mark-to-market accounting in the wake of the panic of 2008. Wallison’s examination of what gave rise to the bubble in house prices is notable as is his treatment of Fannie Mae’s misrepresentation of the mortgages it guaranteed. What the GSE reported having purchased before the conservatorship was a world apart from what it admitted purchasing post-takeover.

The final section, Part IV, “From Bad to Worse,” consists of two chapters. The first highlights the government’s blunders that turned a bad situation into a crisis. It was the Keystone Cops revisited, and directly involved Treasury Secretary Paulson, Fed Chairman Bernanke and New York Fed President Geithner. The second chapter explains why the failure to deal with the real first-cause of the crisis portends setting up the U.S. economy for a repeat performance in the future, while slowing the economic recovery due to a heavy and wrong-headed regulatory burden.

Hidden in Plain Sight should be required reading for the Administration, the Congress, the 50 state AGs, all regulators and the informed public. Wallison proves conclusively with important and unimpeachable data that federal housing policy, as well-intentioned as it may have been in theory, backfired and created the Great Recession, imposing much suffering on all Americans, but especially on the low and moderate income families and households who were the hoped-for beneficiaries of the government policy’s objective, building housing wealth. In achieving that objective it was an abject failure.

The National Home Ownership Strategy was tried and proved a disaster. It failed to either increase homeownership or create wealth for the policy’s beneficiaries. History clearly shows that. As a result, no redo of past policy is needed or wanted prospectively. Hard not to agree …

Postscript: For me, Wallison’s premise that it was errant housing policy that collapsed the economy makes complete sense since it provides rich detail to what I saw developing all along. And what I know comes from my observations working since 1977 as a mortgage market analyst and researcher. I watched the crisis unfold and wrote about it frequently from 1996 until September 2008. I warned the MBA about Fannie and Freddie’s dominance at its Annual Convention in 1996; wrote to the Fed Chairman Greenspan in 2000 asking him to take a closer look at Fannie and Freddie; wrote to Treasury Secretary O’Neill in 2001 to explain that contrary to his public pronouncements, Fannie and Freddie did receive subsidies, huge ones; and wrote to HUD Secretary Jackson in August 2005 asking him to cool the cheerleading for homeownership—for the mortgage market meltdown was nearing.

These are but four of the two dozen letters sent to the Washington elite, the decision makers, asking them to look at what was going on at Fannie Mae and Freddie Mac. And for the FCIC, I prepared a white paper linking all my letters, speeches, articles and Congressional testimony between two covers. The contemporaneous correspondence offers proof that I witnessed the crisis unfold first hand and wrote about it over more than a decade. Wallison has the story right.

Fellow Democrats, you need to read this book. However, in the end this causation debate is a clear Wallison-Pinto victory. On this issue the Democrats are wrong and have been all along, as none other than former congressman Barney Frank has now admitted. His admission is quoted in the book.

Tom LaMalfa is a 34-year veteran mortgage-market analyst and researcher. He has done pioneering work in the areas of secondary markets, wholesale mortgage banking, mortgage brokerages, financial benchmarking and GSE reform. Tom continues since 1977 to co-author an old-fashioned mail newsletter, The Holm Mortgage Finance Report. In the aftermath of the financial crisis, his focus is on Washington, D.C. and the regulatory burden it is imposing on consumers and lenders. His 20-plus-year-old research firm, TSl Consulting, does survey research. He may be reached by e-mail at [email protected].