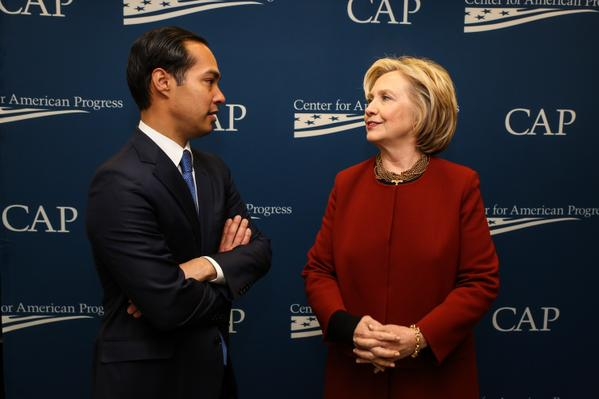 Julian Castro, the secretary of the U.S. Department of Housing and Urban Development, broke with precedent to formally endorse Hillary Clinton’s bid for the Democratic presidential nomination. However, Castro also tried to swat away persistent rumors that he was on Clinton’s short list to be her running mate.

News that Castro would endorse Clinton today during a “Latinos for Hillary” rally in San Antonio had been leaked several days ago and, thus, came as no surprise. Castro's department made no formal announcement of his plans to publicly back Clinton's campaign, and his action was extremely unusual because incumbent cabinet members rarely get involved in their party's presidential primary races. (President Obama has not made any endorsement.)

What was not expected, however was Castro openly addressing the question of being Clinton's running mate by insisting this was not in his future. Speaking to MSNBC today, Castro downplayed the possibility by bluntly stating, “Oh, I doubt that’s going to happen.”

For her part Clinton did not share Castro’s attempt to deflect attention from the subject, telling ABC News that she was “going to really look hard at him for anything, because that's how good he is.”