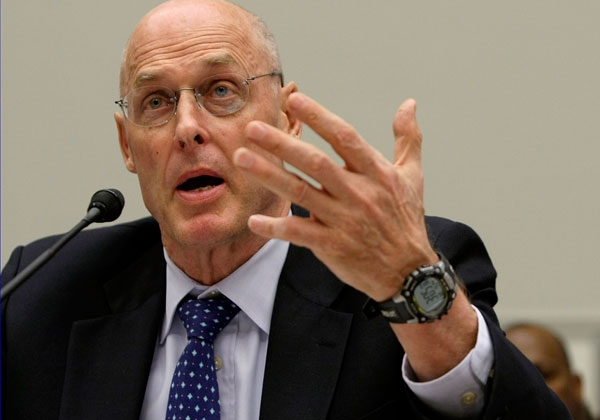 The former Goldman Sachs chieftain and Treasury Secretary that was cited by Time Magazine as one of the “25 People to Blame for the Financial Crisis” has endorsed Hillary Clinton’s presidential bid while excoriating Donald Trump.

In an op-ed column published in The Washington Post, Henry Paulson (pictured above)referred to Trump’s victory in the Republican presidential primaries as “a populist hijacking of one of the United States’ great political parties.” He encouraged Republicans to void the primary results and “put country before party and say it together: Never Trump.”

Using a checklist of negativities that mirrored arguments by some of Trump’s rivals in the Republican primaries and from his Democratic detractors, most notably Sen. Elizabeth Warren (D-MA), Paulson called aspects of Trump’s business career and personality into question as reasons to disqualify him from White House occupancy. While offering no specific praise for Clinton, Paulson insisted that he would vote for her because no other viable alternative exists.

“I’ll be voting for Hillary Clinton, with the hope that she can bring Americans together to do the things necessary to strengthen our economy, our environment and our place in the world,” he stated.

Paulson was chairman and CEO of Goldman Sachs prior to becoming Treasury Secretary under George W. Bush. Paulson’s column made no mention of the refusal of Bush and his father, former President George H.W. Bush, to endorse Trump following the latter’s defeat of Jeb Bush and 15 other candidates in the Republican primaries. Paulson’s role in the run-up to the 2008 recession has been the subject of considerable controversy—as late as May 2008, he confidently proclaimed “the worst is likely to be behind us”—and he used his op-ed price to trumpet the federal bailout of ailing Wall Street corporations via the Troubled Asset Relief Program (TARP) as an apex of the Bush White House’s leadership skills.