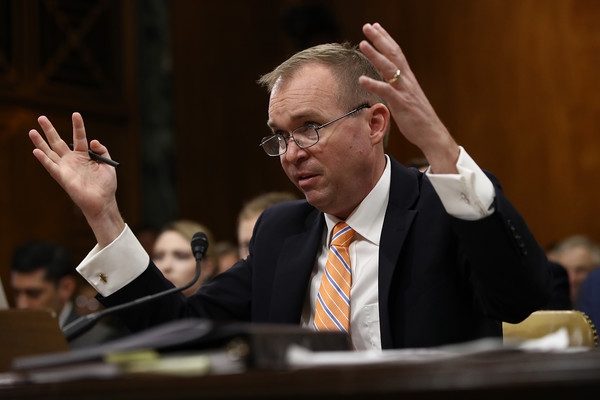 A coalition of 17 Democratic State Attorneys General sent a letter to President Trump demanding the removal of Mick Mulvaney as Acting Director of the Consumer Financial Protection Bureau (CFPB).
The Attorneys General cited Mulvaney’s comments that the Agency was a agency as “a joke” that represents “an awful example of a bureaucracy that has gone wrong” as evidence that he is the wrong man for the job.
“Such statements about an agency that has helped millions of American consumers and achieved fundamental reform in a number of critically important areas of American commerce are categorically false, and should disqualify Mr. Mulvaney from leading the agency, even on an acting basis,” the Attorneys General wrote. “As the top state law enforcement officials charged with investigating consumer complaints of fraudulent, deceptive and abusive financial practices in our respective states, we know from first-hand experience that the need for strong consumer financial protection is undiminished in the years since the financial crisis.”
However, the Attorneys General did not specifically demand the seating of Leandra English, Richard Cordray’s hand-picked successor, as Acting Director of the CFPB. The letter was signed by the Attorney Generals of California, Connecticut, District of Columbia, Hawaii, Illinois, Iowa, Maine, Maryland, Massachusetts, Minnesota, New Mexico, New York, North Carolina, Oregon, Vermont, Virginia, and Washington.
Link copied
Published
Dec 12, 2017
Coming Up See All
Sep
28
DealDesk: Introduction to Acra Lending's Light Doc Programs
Webinar
2:00 PM ET
Sep
29
How to Win with Non-Delegated Correspondent - Key Insights on the Model and Fulfillment Solutions
Webinar
2:00 PM ET
Oct
06
How to Use Credit as A Strategic Tool to Attract More Leads, Make Better Offers and Close More Loans
Webinar
2:00 PM ET
Get the Daily
Advertisement
Advertisement
Military Lending
Saluting Military Lenders And Originators