Existing-Home Sales Down, But Prices Go Up – NMP Skip to main content

Existing-Home Sales Down, But Prices Go Up

Existing-home sales in January was the largest year-over-year drop in over three years, according to new data from the National Association of Realtors (NAR).
Total existing-home sales were down 3.2 percent in January to a seasonally adjusted annual rate of 5.38 million from a downwardly revised 5.56 million in December 2017. Last month’s sales level represented a 4.8 percent decline from one year earlier, and were also the largest annual decline since August 2014 at 5.5 percent and at the slowest pace since the 5.37 million recorded last September.
While sales were down, prices were up. NAR found the median existing-home price for all housing types in January was $240,500, up 5.8 percent from the $227,300 level from one year earlier. January marked the 71st straight month of year-over-year gains.
Also on the increase was the total housing inventory, which ended January at 1.52 million existing homes available for sale, 4.1 percent above December’s level. However, last month’s level was 9.5 percent lower than a year ago (1.68 million) and the inventory level has fallen year-over-year for 32 consecutive months. Unsold inventory is at a 3.4-month supply at the current sales pace (3.6 months a year ago).
“The utter lack of sufficient housing supply and its influence on higher home prices muted overall sales activity in much of the U.S. last month,” said NAR Chief Economist Lawrence Yun. “While the good news is that Realtors in most areas are saying buyer traffic is even stronger than the beginning of last year, sales failed to follow course and far lagged last January’s pace. It’s very clear that too many markets right now are becoming less affordable and desperately need more new listings to calm the speedy price growth.” 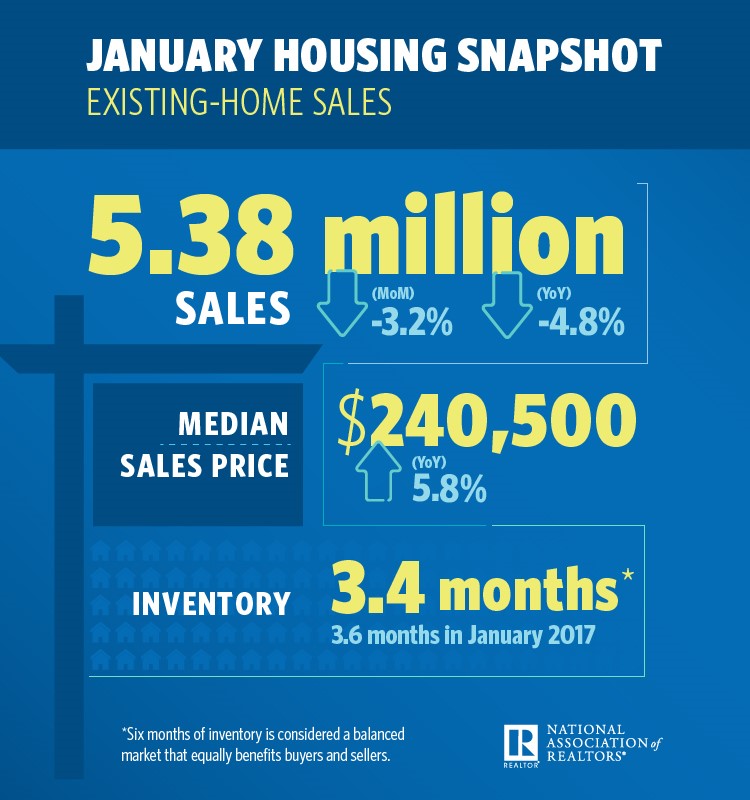