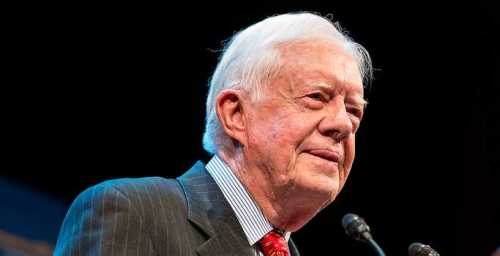 Former President Jimmy Carter took aim at the Trump Administration over what he perceived to be a poor handling of issues impacting affordable housing.
In an interview with CNBC, the former President insisted that “low-income housing needs to be raised much higher as a priority for our country.” He criticized the focus of Housing and Urban Development Secretary Ben Carson to transition low-income people away from long-term dependency on federal programs.
“I don't think that making people self-sufficient who are already in desperate need and who have never had a decent place to live is a good approach to low-income housing,” he said. “You can make people suffer longer by depriving them of adequate help.”
Carter has been a visible presence in Habitat for Humanity during his post-presidential years, acknowledged that the nonprofit has been facing greater construction expenses in building homes for low-income households. He noted that the cost of building a home 35 years ago was roughly $20,000 to $25,000 but has more than quadrupled over the years.
"The main thing that we have failed to do is to let people in general join in with Habitat and emphasize the need for low-income housing," he said.
Link copied
Published
Aug 31, 2018
Coming Up See All
May
17
OriginatorTech
Virtual
•
11:00 AM ET
May
19
Mastering Cash-out Refis to Drive Volume in Today's Mortgage Market
Webinar
1:00 PM ET
May
24
Suncoast Mortgage Expo
Tampa, FL
Get the Daily
Advertisement
Advertisement
Community
Leading LOs 2022