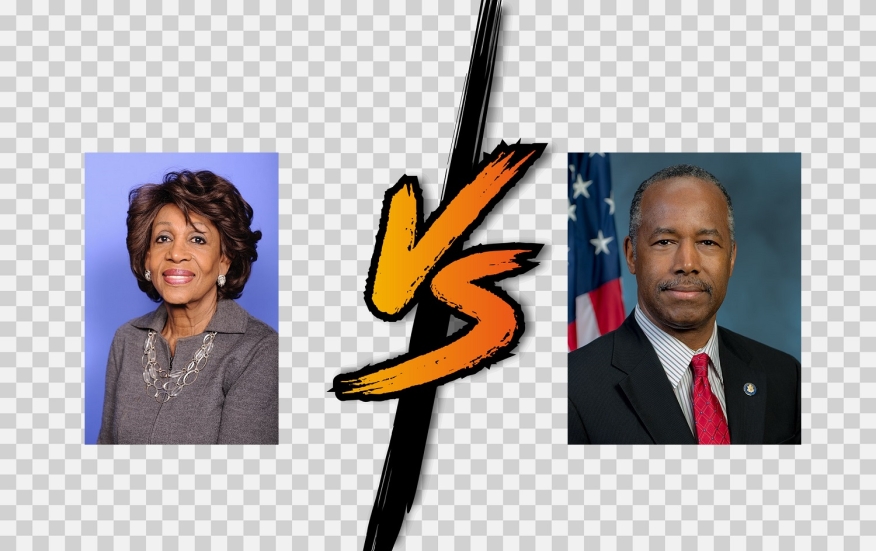 Rep. Maxine Waters (D-CA), the chairwoman of the House Financial Services Committee has engaged in a public feud with Housing & Urban Development (HUD) Secretary Ben Carson, with the legislator calling the HUD chief a “complete failure” at his job after he accused her of playing politics at the expense of the homeless population in her congressional district.
According to reports from Politico and the Washington Examiner, Waters sent a letter to President Trump on Oct. 28 demanding answers to news stories that the administration was considering efforts to relocate homeless people off the streets in California. Waters began her letter by declaring, “Your shamelessness knows no bounds.”
Carson responded to Waters with a letter that stated, “Shamelessness is a career politician of 30 years laying blame … Shamelessness is allowing more than 55,000 Americans to live on the very streets they represent. To me, the most compassionate, obvious, and logical solution would be to get as many homeless Americans off the streets—with a roof over their heads—as soon as humanly possible.”
Carson added, “I have sent multiple letters to your office and requested numerous meetings, but each time you’ve refused … Basic manners elude you and it seems that instead of producing results, you’re more interested in producing cheap headlines at the President’s expense—like a true career politician.”
Carson also put a personal spin to his complaint by telling Waters, “My mother always taught me that people shouldn’t throw rocks, especially while they live in a glass house.”
Waters responded in an interview that Carson “is like a duck out of water and has been a complete failure at HUD. His basic philosophy is antithetical to his duties and HUD’s mission. If he is sincere in wanting to have a constructive, bipartisan conversation with me, he can start by providing substantive answers to the numerous questions posed in my Oct. 28 letter and public support for the Ending Homelessness Act.”
She topped off her remarks with a personal attack on Carson, stating, “In the meantime, he should contain his tantrums and leave his mother out of this.”
Earlier this year, Carson’s efforts to mend diplomatic relations between the Trump Administration and the late Rep. Elijah Cummings (D-MD) came to naught as Cummings turned down an invitation to join Carson on a tour of HUD’s work in Baltimore. Carson found himself in the middle of a war of words between President Trump and Rep. Cummings regarding the socioeconomic situation in Baltimore.
Link copied
Published
Nov 20, 2019
Coming Up See All
Aug
11
California Mortgage Expo — San Diego
San Diego, CA
Aug
11
SMS Marketing 101
Webinar
2:00 PM ET
Aug
18
Maximum Acceleration
Las Vegas, NV
Get the Daily
Advertisement
Advertisement
Analysis and Data
Redfin: Homebuyers Return As Mortgage Rates and Prices Drop Steadily