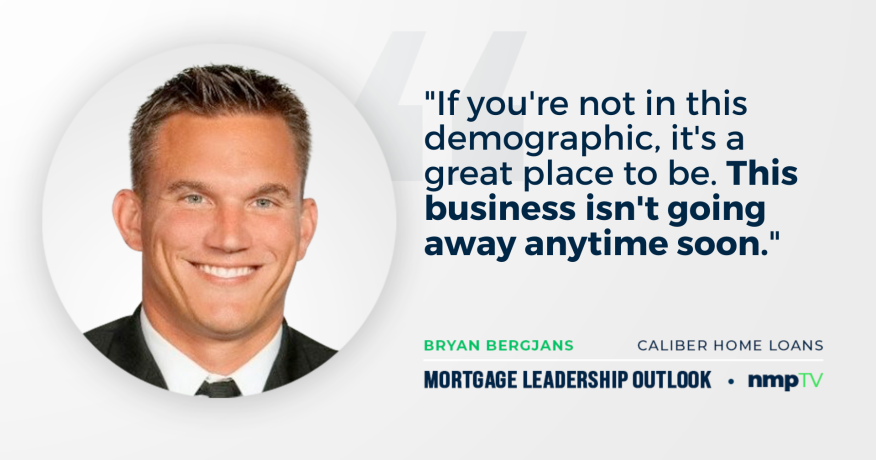 Bryan Bergjans and Andrew Berman, host of the Mortgage Leadership Outlook series, discuss how military lending can be a viable business for mortgage originators

Bryan Bergjans, senior vice president, national director of military lending for Caliber Home Loans Inc., joined series host Andrew Berman, head of engagement and outreach for National Mortgage Professional magazine, to discuss how military lending can be a viable business for mortgage originators, as well as the advantages of working from home during the COVID-19 epidemic.
Bergjans is responsible for the expansion of Caliber's support of service members. According to Caliber, he dramatically increased the number of VA loans originated at the company. He joined the Navy out of high school in 1995, and later earned a master’s degree in business administration and HR management from American InterContinental University. Although he began a career in mortgage banking in 2002, he remains a member of the Navy Reserves and recently completed a deployment to Afghanistan. Today, he’s the Department Head for Commander Naval Forces Korea Detachment Delta in St. Louis, Mo.
Military lending is a growing segment more originators should pay attention to, said Bergjans. Officials from the Veterans Administration (VA) told him the amount of loans issued as of the end of May 2020 already equals last year’s volume, adding that VA purchase activity is up 10-15%.
“If you’re not in this demographic, this is a great place to be. This business isn’t going away anytime soon. We need more people working with this demographic who have a sincere mindset of wanting to help. It’s a fantastic demographic. If you do great, they are going to tell everybody,” Bergjans advised.
There might be reticence, though, from originators who lack a military background to enter this market. Bergjans said a good approach is to get involved helping veterans through non-profit organizations, but without the goal of instantly building business through the volunteerism. Concurrently, increase your education on VA benefits and share that knowledge with your real estate partners. “Once you’re perceived as the expert, you develop your sphere. Volunteer, get involved, and educate.”

►Recently, the VA removed the cap on zero-down loans, which used to be set by county. Now, the decision is up to the lender. Bergjans said this will help military borrowers get into better “forever” homes when they retire because they won’t have to tie up large amounts of cash in down payments to buy better homes.
►More real estate agents need to learn that zero down payment is a good thing. It doesn’t mean customers lack commitment to finalizing purchases. People often put large down payments down to offset credit issues, he said. “If you’re entitled to it, you should be able to use it.” There’s also a problem that VA loans get lumped in with other government financing like FHFA and USDA. “VA is a benefit, not a program. Your FHFA customer didn’t have to go to Iraq to get this benefit.”
►Active duty military and veterans make great customers because they are required to have strong credit ratings to maintain their security clearance because the military doesn’t want members with financial problems. Bergjans said the average credit rating on a VA loan is 710. “If you don’t have a clearance, you don’t have a job,” he said.
►VA loans have low default rates because of a focus on making sure the vet has enough money to pay the mortgage after meeting other obligations. Bergjans said default rates would be lower if more lenders did that. He said too many lenders base debt-to-income ratios on gross income, which doesn’t reflect taxes and other mandated costs.

Caliber Home Loans' national director of Military and Veteran lending, Bryan Bergjans, is set to make another appearance on the Mortgage Leadership Outlook on Wednesday, Nov. 10.

The product was launched to help support military homebuyers.

They highlight a streamlined process for active-duty military members, Veterans, and their families.