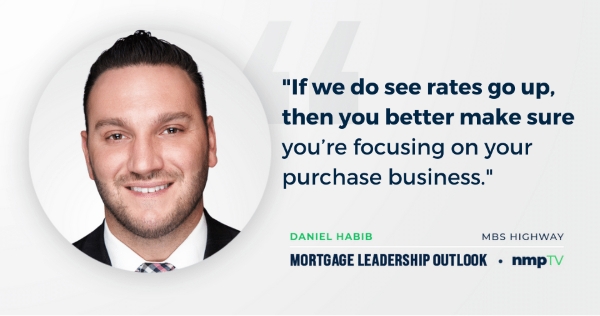 Daniel Habib, executive vice president and one of the founders of MBS Highway, appeared on Wednesday’s Mortgage Leadership Outlook. He and series' host Andrew Berman, head of engagement and outreach for National Mortgage Professional magazine, discussed how important his service was this year with the volatility and artificial influence on rates to manage liquidity and volume, what the near future of rates look like, what they look like in the long-term and more.

Habib has been in the mortgage industry for more than 16 years. With MBS Highway, Habib and his team developed the Mortgage Market Guide to help industry professionals master the market.

Habib said getting into the mortgage business was in his blood as he remembers watching his dad, Barry, rise up the ranks from an originator to one of the top producers in the industry. He added that his father was able to be successful by understanding what’s driving the market.

Check out the full interview between Habib and Berman below.