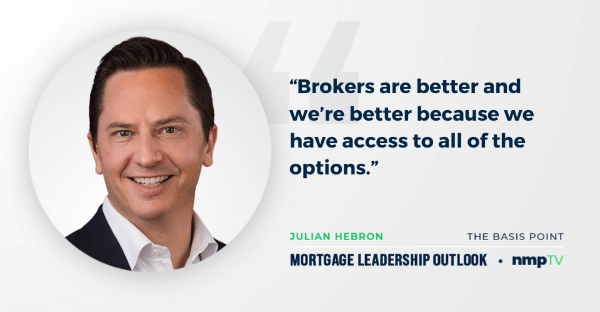 On Wednesday, March 10, the Mortgage Leadership Outlook featured Julian Hebron, founder of The Basis Point. Hebron and series' host Andrew Berman, head of engagement and outreach for National Mortgage Professional Magazine, explored the UWM ultimatum, capital markets, what independent originators can learn from big brands, an economic outlook for 2021, opportunities for originators in 2021 and beyond and more.

Hebron is a former C-Suite marketing executive in the mortgage industry with a handful of years working as a top producing originator and branch manager while building The Basis Point, a blog; sales and marketing strategy consultancy for banks, lenders, and fintech, and a "down to earth" financial media brand. He also served in executive sales and marketing roles with UBS, Wells Fargo, loanDepot, and LendUS/RPM Mortgage over the last two decades.

Check out the full interview between Hebron and Berman below.