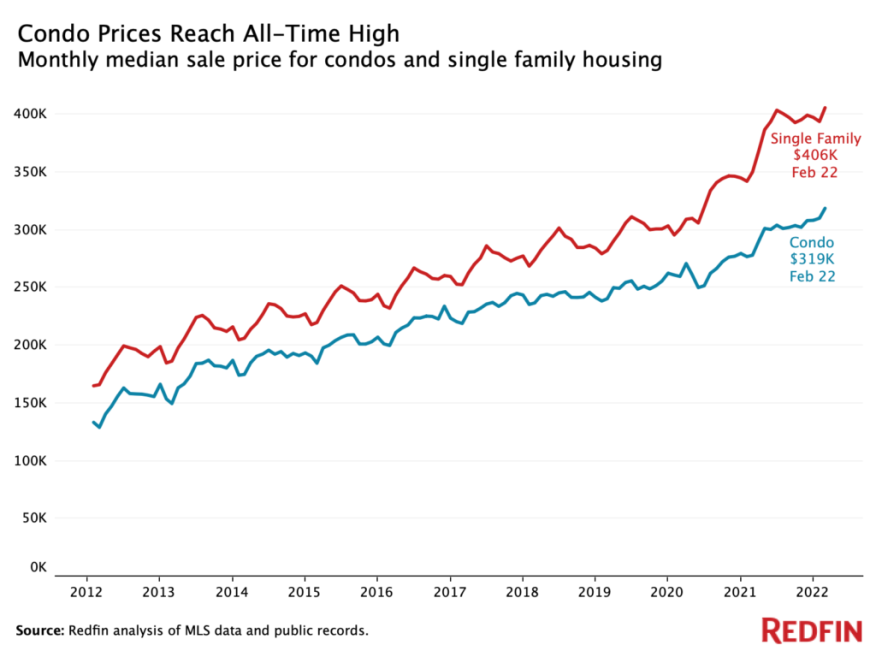 Demand for single-family homes surged during the pandemic — but it surged so much that condos are now all some homebuyers can afford.

A typical condo sold for a record $319,000 in February, according to a new report from Redfin.

Despite the 14.6% increase in price from a year earlier, condos are still a more affordable option amid skyrocketing home prices, the report found. Single-family home prices hit a record $406,000 in February, up 15.9% year over year and up 34.9% from two years earlier.

“The condo market has bounced back,” said Chance Glover, a Redfin manager in Boston. “People are no longer afraid to live downtown, close to the crowds — and they often prefer it, because they’re close to the office and all the amenities of the city. Rising prices are pushing single-family homes out of reach for a lot of buyers, so condos are affordable in comparison.”

Condo prices have also jumped because of a shortage of inventory, Redfin said.

Condo supply was just shy of a record low in February, down 28% year over year. New condo listings were down 6.1%. Condos are experiencing an even bigger inventory decline than single-family homes, which saw a 14% year-over-year drop and a 2.5% drop in new listings.

However, condos still aren’t as competitive as single-family homes.

Nearly two-thirds (64.6%) of condo offers written by Redfin agents faced competition in February, up from 49.3% a year earlier. That’s partly due to the lack of supply, with buyers competing for the few condos on the market. By comparison, 72.9% of offers for single-family homes faced bidding wars.